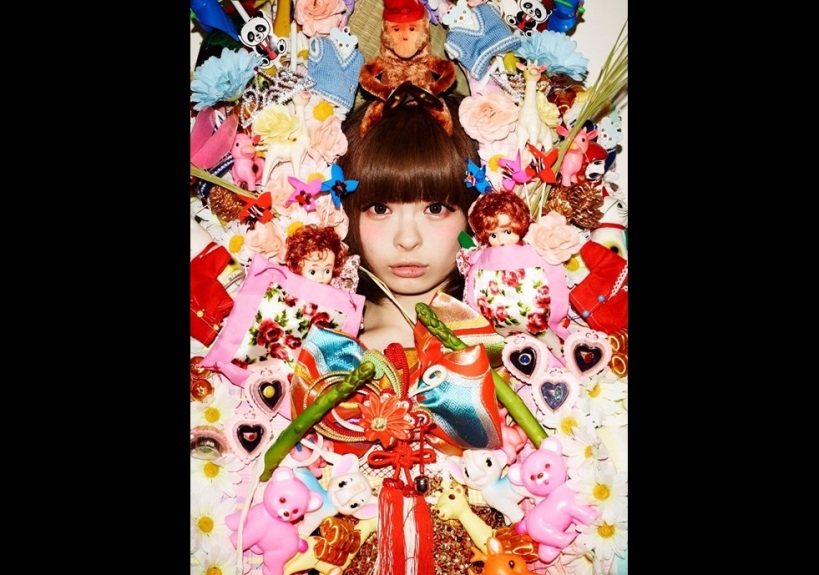 I’m happy to have another article published in DAZED this month. You can read the piece here, or below. (Warning: there’s a ridiculous flashing image of a Ganguro I drew at the end of this page.)

I’ll be back living in Tokyo from January so looking forward to writing more stuff on ground level.

What the hell has happened to Tokyo’s fashion subcultures?

Don’t say ‘sayonara’ just yet. They’re still here – you just have to look harder to spot them.

Japan. One of the most technologically advanced countries in the world, yet a place where fax machines are still commonplace. A country where conveyor-belt sushi arrives in seconds, but it can still take days to sort out a phone contract. Perhaps the biggest contradiction of all is the perception some people seem to have of the nation’s capital – with many first-timers stepping off the plane in Tokyo and expecting to fall face-first into a scene from Takeshi’s Castle. As soon as they board a train to central Tokyo though, they’re in for a bit of a shock. Social etiquette means no one speaks on the trains in Japan, so any madness is going to have to be conducted in silence. This is the first indication that ‘crazy’ Japan maybe isn’t just as crazy as they were led to believe.

The same could be said about fashion. The stereotypical perception of Japanese youth fashion from abroad is still firmly rooted in maid uniforms, Lolita outfits and general neon madness. In the West this belief was heavily backed up in 2004 when Gwen Stefani released her first solo album,Love. Angel. Music. Baby. The album introduced the Harajuku Girls, four backup dancers who dressed in Stefani’s interpretation of the youth fashion trends of Harajuku, a district in Tokyo. Although the area’s style had been documented in Japan for years (notably in Fruits magazine, founded in 1997) since then Harajuku culture has exploded globally – peaking in 2011 when Japanese fashion model and singer Kyary Pamyu Pamyu released her first promo single, “PonPonPon”, citing Stefani as an influence. 87 million views on YouTube later and you would assume that all the kids in Tokyo – certainly in Harajuku anyway – would be dressing in Kyary’s signature OTT style, but this simply isn’t the case.

‘Harajuku on a Sunday’ used to be a thing. For years and years, the bridge over the Yamanote line beside the station was packed with kids dressed up in all sorts of creations – a cross-section of more fashion subcultures than you could keep track of. Over the years, these numbers have dwindled to the point that virtually no one hangs out there anymore, bar a lonely group of Rockabillies who dance to amuse themselves (and tourists) every Sunday. The various sub-groups of Lolita girls have gone, as have the cosplayers dressed in super-expensive outfits depicting characters from their favourite manga and anime. So why then, when someone as visual as Kyary Pamyu Pamyu has such a strong media presence, are fashion subcultures seemingly on the decline on the streets of Tokyo? Well, it’s not so much that they’re not there. It’s just that they’ve evolved.

“The various sub-groups of Lolita girls have gone, as have the cos-players dressed in super-expensive outfits depicting characters from their favourite manga and anime.”

There’s no doubt that there has been a huge shift away from the insanely sugary stuff that was popular a decade ago. Some of these styles have stagnated, and a lot of girls have moved to Gothic or Classical, which honestly just stands out less in a public space than full-on Lolita. And while Kyary Pamyu Pamyu is undoubtedly influential, other groups such as AKB48, E-girls and Exile are arguably even more so. These groups dress in a more urban style – using brands that kids can find and replicate on the high street as opposed to dropping wads of cash in the boutique stores of Harajuku. This, combined with the continued popularity of Normcore in Japan – a unisex fashion trend characterised by unpretentious, average-looking clothing – means standing out from the crowd isn’t necessarily the ‘in’ thing anymore.

There was a time, however, when standing out was exactly what the kids wanted. In the mid-1990s, the Shibuya and Ikebukuro districts of Tokyo were filled with girls dressed in Ganguro style – an alternative fashion trend distinguished by a dark orange tan in rebellious response to the traditional Japanese concept of beauty: pale skin, dark hair and neutral makeup tones. In the end though, the ever-present bihaku craze of wanting whiter skin was always destined to prevail. Ganguro style soon died out, as teenage girls and those in their twenties attempted to emulate the style and makeup of Japanese pop singers such as Ayumi Hamasaki. Not only this, but the increase of Korean K-Pop culture in Japan meant current fashion trends were now also being dictated by what Korean pop idols were wearing.

Of course fashion subcultures still exist in Japan. They’re just not as common, nor as extreme. Many of the original Lolita and Visual Kei designs have been heavily diluted for the mass market, so it’s genuinely hard to tell if someone is dressing to follow a certain scene or simply wearing what they have bought on the high street. As for cosplay, well it will never die. But instead of on the streets of Harajuku, you’re now more likely to see it at specific conventions such as Anime Japan. It means if you do arrive in Japan thinking you’re going to see a gang of Pikachus walking down the street you may be in for a disappointment. Then again, you might just get lucky…