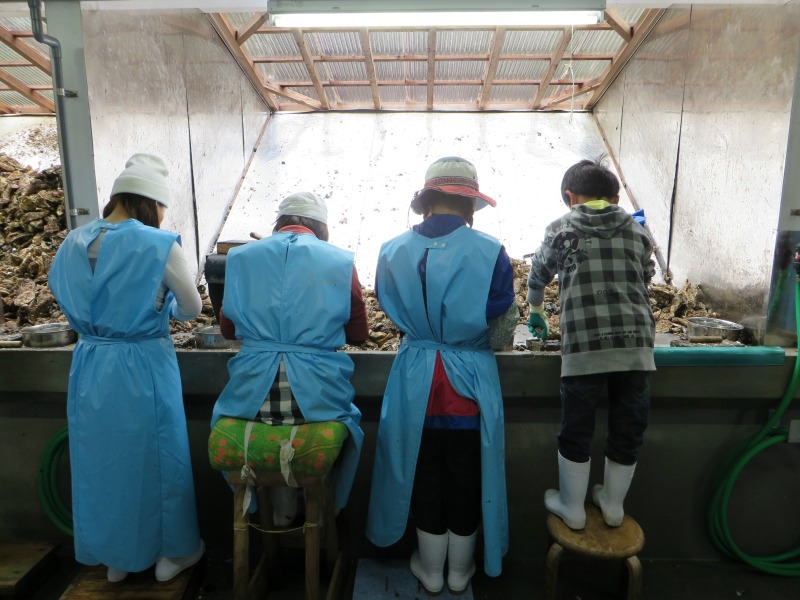 Working with nature – and against it. Local life in coastal Japan.

2017 was, for me, an extremely happy and productive year. As well as making the pilgrimage to my old apartment in Fukuoka City, I was able to spend a week in Vietnam, sleepily wandering the streets of Ho Chi Minh City. I will do a little end-of-the-year round-up at a later date, but it was undoubtedly my visits to Miyagi prefecture here in Japan that meant the most – spending quality time with my girlfriend’s family.

From an outside perspective, the main thing I love about life in the Oshika Peninsula – a stretch of land in Northeast Honshu jutting out into the Pacific Ocean – is its pace, or rather, lack of. Completely at odds with Tokyo, there are hardly any people, hardly any cars, hardly much of… anything. But with this isolation also comes hardship: villagers relying on farming in a part of the world where typhoons can wipe out your entire crop in a single day.

On my second visit to Miyagi I was given the opportunity to spend some time inside an oyster shucking compound nestled within a small harbour. Built by the local authorities, the small factory has a number of partitions which are rented out to different families who want to shell (or ‘shuck’) all the oysters they have harvested. While each family is essentially competing against each other, the vibe inside the place is pleasant – but the focus is most definitely on work. Everything is tightly regulated, meaning that you can only start work when the buzzer sounds. (In order to stop you having an unfair advantage by having more time to shuck oysters than the people beside you.)

During a morning ‘coffee’ break where we all sipped green tea, I learned first-hand how hard a job like this is. Yes there is money to be made – sometimes good money – but the work is back (and wrist) breaking, with no shelter from the biting winds in winter. Shuckers wear huge rubber overalls, gloves and boots to protect them from the elements, as well as from the smell of the shellfish. At one station, three generations of one family worked together – the youngest on a day off from elementary school and running about with a huge bag of potato chips.

This part of Japan was hardest hit by the 2011 tsunami and is only now rebuilding. But yearly typhoons can also cause severe financial damage to these workers who can lose all their oysters when nets and harvests get washed away. Not only that, too many oysters on the market and cause the selling price to go down, so there’s a delicate balance between supply and demand.

While this day was no doubt just another day for the workers, I felt lucky to have been welcomed into their morning routine – and it was another experience of rural coastal Japan I will remember. 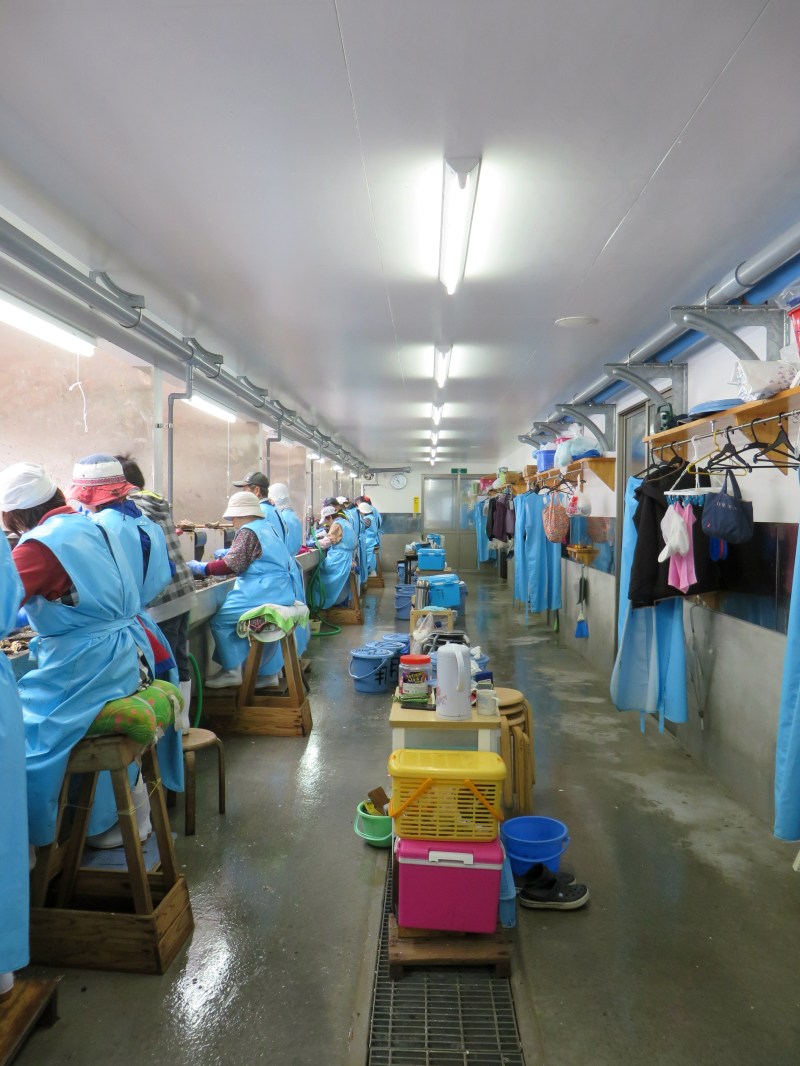 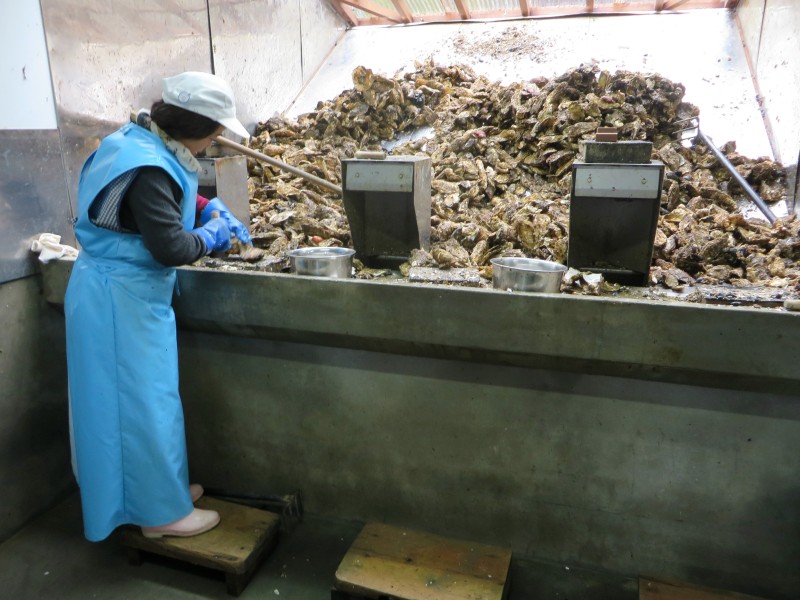 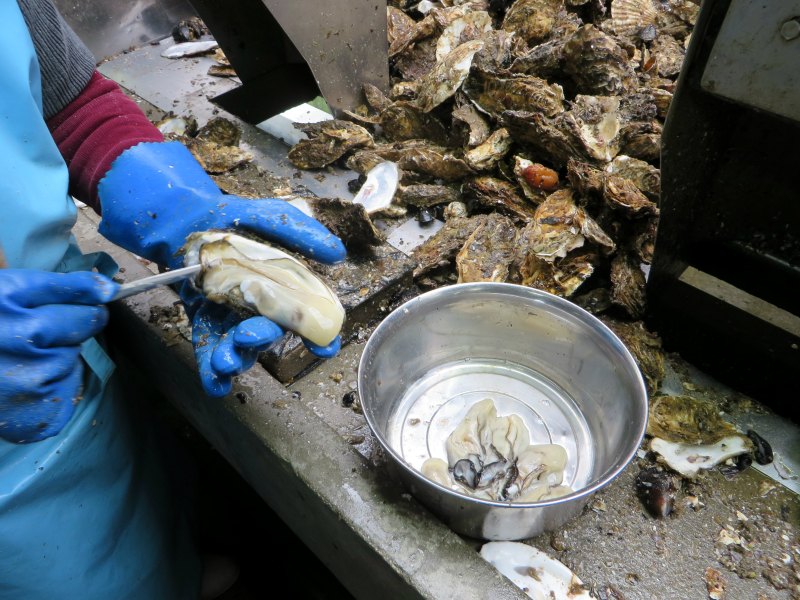 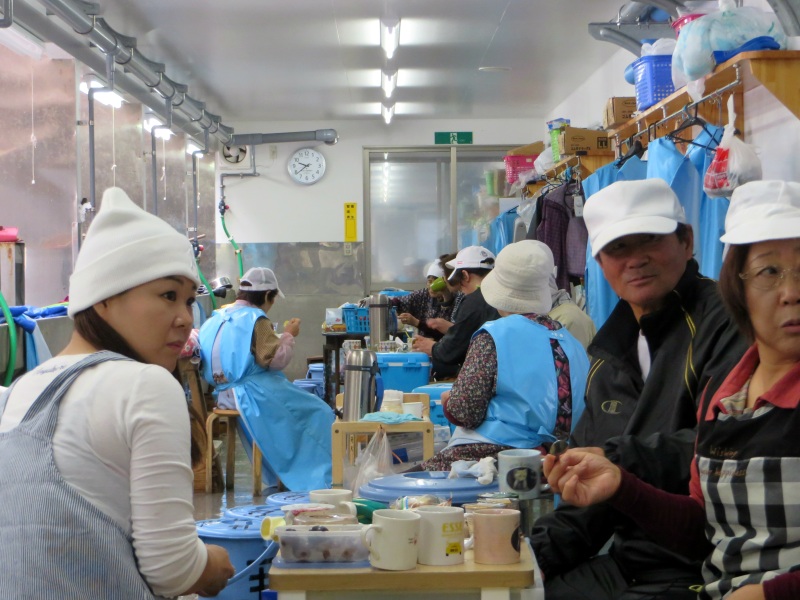