I’ve been in Japan 16 months now and I’m grateful for the opportunities living here has given me. In that time I’ve been to Taiwan twice, watched the sun set over the Temples of Bagan in Myanmar, drank moonshine in my friend’s apartment in Bangkok and next month I’m off to explore Bali. Time/cash permitting I’d also love to hit the Philippines before the end of the year. In August I’ll also be visiting Nagoya for the first time for work (I think it is anyway, I honestly can’t remember if I’ve been) and revisiting Kyoto.

It’s hard to save money living in Tokyo but I’m trying to here and there. But I don’t want to deny myself a good time either. I’d rather have no savings and a good time than penny-pinch and be bored/miserable. I don’t drink a hell of a lot any more, but nights out are expensive when I do have them, and the amount of galleries and travelling I do within the city eats into my salary. Realistically I don’t know how much cash I’ll be able to save over the next year. My national  health insurance payments are about to kick in. I only had to pay £60 for the entire yearly period March-March but from now on I may have to pay upwards of £130 a month. The way I see it, that’s £1,500 that could have been used for flights. Its unavoidable though. You need to be covered. Not only that, but if you aren’t seen to be making your payments you won’t get your visa renewed. (I even know one guy who had his bank account frozen, but I think he owed years of back payments).

I’m looking forward to Bali. Last weekend marked the official start of the heat in Tokyo (yes, there is an actual official date) and by August I’ll be itching to escape the melting concrete. Today was 36 degrees in Chiba where I was working. Like myself, most of my friends will be going away next month, travelling, or back to see their families. For those who stay, it’ll be a solid stint on the beach and rightfully so. The heat within the city is laced with extra humidity and is overpowering – the reason why I went to a pool party and the beach over the weekend. Of course Bali will be hot too. But the reflective heat created by a megacity is uncomparable.

My originaI plan was to fly into Jakarta and backpack overland to Bali. It turns out though that I will be landing in Indonesia on the last day of Ramadan. Talk about timing. I really should have realised this but I’m luckily I spotted it at all so I could fix it. Four million people will be leaving Jakarta on the same day as me, all travelling overland east to go back and see their families. All the buses and trains are already being booked up. Delays are inevitable. Overland travel will be slow, laborious and exhausting. I just can’t risk the journey as I need to be in Bali for a certain date to catch my flight back to Tokyo. Thinking about it, I was maybe pulling off too much in that timeframe anyway. It was definitely doable, but a few of those days would have been spent on buses. So Java will have to wait. Instead I’m flying direct from Jakarta to Bali and spending my time down there. I’ve had a very busy few months so this has probably worked out for the best. More time to chill, eat, chill and eat some more.

One thing I want is off the beaten track. I’ve been reading about Nusa Penida, an island off the east coast of Bali that has little to no tourist infrastructure. “Visitors wishing to explore the remote, rugged areas of the island in the high centre and south may be able to find informal accommodation with a local family by asking a head of village (Kepala Desa).” Sounds great! I’ll also of course be heading north to visit Ubud, a town regarded as as the cultural centre of the province. Regular, quiet village life is all I want to see during my time in Bali.

That’s four weeks away. Until then I have space-themed summer schools to teach at, more trips to the beach, a few electronica parties and a mate’s stag-do at Department H – a fetish club held in a converted cinema (!) 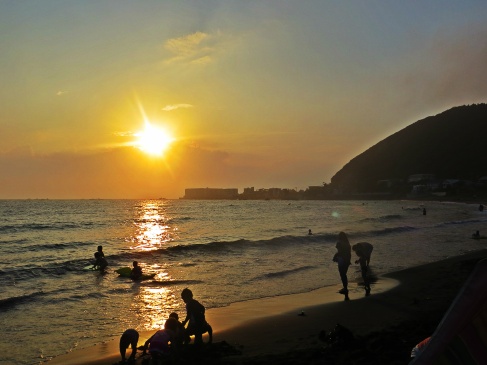 Isshiki Kaigan the next.