“First-time visitors to Tokyo may arrive with one of two fantasies dancing in their heads. One is the hyper-modern city of sleek 100-story high-rises and gleaming starchitecture. The other is the darker version: The city that inspired Blade Runner and Akira, a super-dense, technology-saturated metropolis in which Manga faces on towering billboards grin down on shootouts and chase scenes.”

Urban planning is something that has always interested me: the organic way in which cities seem to grow and intertwine like living, breathing organisms. When I first visited Tokyo eleven years ago, I was firmly in the Akira and Blade Runner camp – a young, naive university graduate eager to get lost amongst the skyscrapers, believing Japan’s capital to be made out of fluffy neon and futuristic fairy dust. It was only when moved here to live that I realised that the fuel that powers the Tokyo economy looks, in large part, far less cinematic. Newcomers may be shocked to find that much of residential Tokyo actually resembles the low-rise, high-density habitats one normally associates with cities like Mumbai and Manila.

Alongside the futuristic visage of skyscraper Tokyo, a human-scale city lies along twisting, backstreets where mom-and-pop stores sell homemade noodles, and private homes double as independent shops engaged in local trades like printmaking and woodworking. This ‘everyday’ suburban Tokyo is very much different to the one that most short-term visitors will experience. I’m not lumbering all tourists into this category, but I know myself that it look a long time for me to discover what Tokyo is really like. I’m still discovering.

To this day Tokyo is often described as a collection of villages. I live in one such village, Shimokitazawa, which sits on the Inokashira line. I cycled the length of the train line a few weeks back, passing through areas such as Eifukuchō, Nishi-Eifuku, Hamadayama, Takaido and Fujimigaoka. Each of these towns is essentially just a main street with a bank, a supermarket, a flower shop; they all even share the same main road, Inokashira Dori. Each train station in the city is the core of a little town. So with 924 stations in Tokyo, that’s 924 towns.

It’s hard to imagine now, but these small hamlets were smoldering ash pits 70 years ago – reduced to rubble by the bombs of Allied forces during World War II. When the war ended, the Tokyo government basically made it clear that the citizens would rebuild the city. The government would provide the infrastructure, but beyond that, the residents would be free to build what they needed on the footprint of the city that once was, neighbourhood by neighbourhood. Such unplanned, organic, incremental building forms the basis of the suburban Tokyo you see today: houses and shops that sit side by side in harmony, yet with no real formal connection. An informal city that has long since become formal. The term organised chaos may be a brutal oversimplification, but it’s apt.

The photos below were taken from high above Oji, a small neighbourhood in Kita Ward that will never win any Tokyo popularity contests. Like the majority of Tokyo’s so-called ‘villages’ Oji is small and nondescript – and only from up high do you really get a sense of the rambling concoction of interweaving, claustrophobic streets that are the lifeblood of the city. Someone once told me that Tokyo is the most “beautiful ugly city in the world”, and as I look down from above, I have to agree. 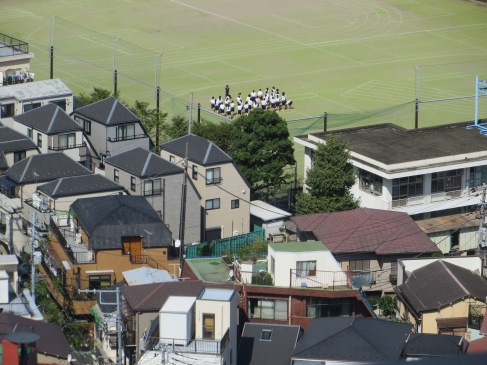 If you’re interested in the makeup of cities – and how they will evolve in the future – check out the Rockefeller Foundation’s Informal City Dialogues project that happened last year. It set out to explore neighborhoods, economies and systems that exist beyond the reach of government: the slums, black-market industries and undocumented businesses that fuel these cities’ growth. It homes in on six cities: Accra, Bangkok, Chennai, Lima, Manila and Nairobi.