One week after quitting my job in Tokyo I flew one-way to Bangkok to hang out in Thailand, Nepal and some other countries for a while. I was excited about the trip, but with so much to sort out – and the inevitable goodbyes – I was apprehensive too. It wasn’t until I actually landed here that I knew I’d absolutely made the right decision. That moment came when I was walking down the southern end of Hua Hin’s deserted beach at about 8am on a weekday morning – the same time I would have been commuting through Tokyo, beginning training for a new school year. I needed a break. And this is certainly a break.

I took a picture of the beach, and because there wasn’t a soul about I stuck a sticker of a hula-monkey on it, as you do. It kinda summed up how I was feeling at the time. If you look at the photo you can see a mountain (more of a hill, really…) rising in the distance and I wondered what was down there. I asked a few random people I eventually saw, but none of them had been, nor cared. But I still wanted to go, so I took a mental note and then went for a swim. The next day, I went down to the main road and jumped on the back of a songthaew (public pick-up truck) headed south – you see these all over the town. It was so busy I had to hang off the back. It dumped me off at the end of the road at a small village and the base of the hill: Khao Takiab. 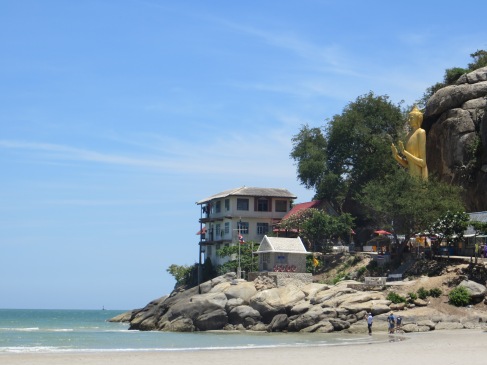 The base of Khao Takiab, Hua HIn.

I didn’t realise it at the time, but the monkey sticker I had put on the photo for a laugh turned out to have more meaning than I thought. As I walked down to the beach I saw a troop of monkeys in the distance hanging out on the rocks and jumping into the sea. While there are other beaches in Thailand that are solely promoted for having monkeys on them, this only serves to turn them into absolute dickheads: attacking tourists, stealing stuff and demanding food. These guys were just content to swim and lie about in the shadow of the 20-metre gold Buddha that stands guard over the mountain. (Saying that, I’ve a bit of a love/hate relationship with the little bastards ever since one of them bit me in Bali, resulting in a bunch of rabies jabs. So I just told these ones to wise up.) 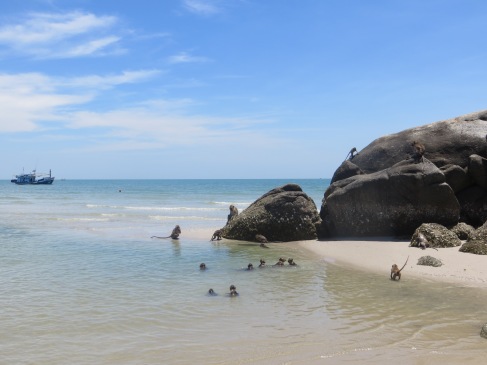 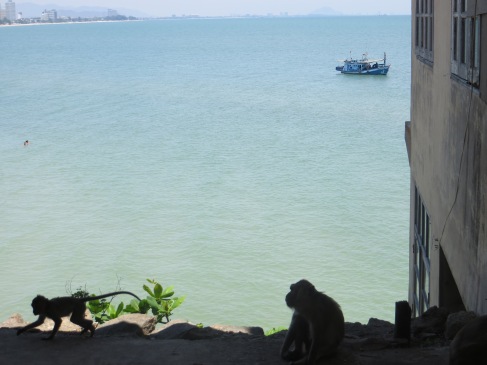 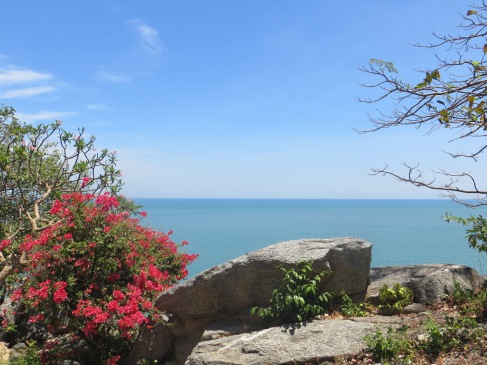 The walk to the top is easy, but steep – and while the temple at the peak is standard enough with its assorted Buddhas and incense holders, it was the other stuff up there that interested me. In the distance I could see some sort of building that had been left to ruin (the Thai equivalent of an abandoned haikyo in Japan). Maybe at one time or another this had been another temple – or a memorial of some sort. A load of plaques bearing Thai Sanskrit had been smashed with a sledgehammer and were lying all over the place. Trinkets and treasures lay discarded, while the inside had been completely gutted bar some chairs and photos etc. Of course, I was the only one up there remotely interested in such a place so it was cool to poke around on my own. There was a crude ladder on the second floor that led up to the roof and from there I saw some great views over the Gulf of Thailand.

Looks like it could have been a memorial of some sort.

You don’t realise how wrecked it is until you walk round the back. 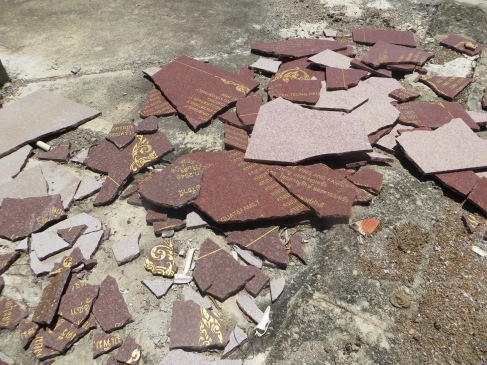 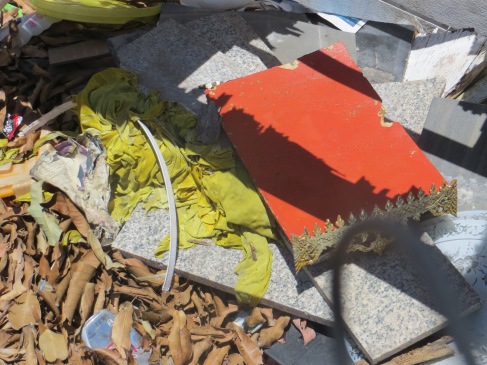 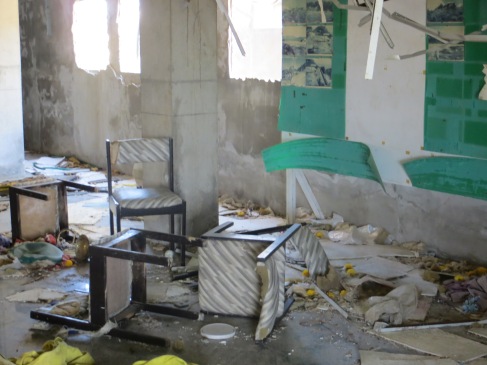 View from the top: Gulf of Thailand

Meanwhile, next door to the ruin, was a cordoned-off area belonging to the Thai military – a radar base and off-limits, although the Thai guard in full overhauls (in 37 degree heat) seemed more preoccupied in getting his lighter to work than caring about me sniffing about. Looking out to sea, I could see some military boats just off the coast, which are there to protect the King’s palace only a short distance away. I’m guessing this radar system is something to do with those boats – but hey, what do I know. 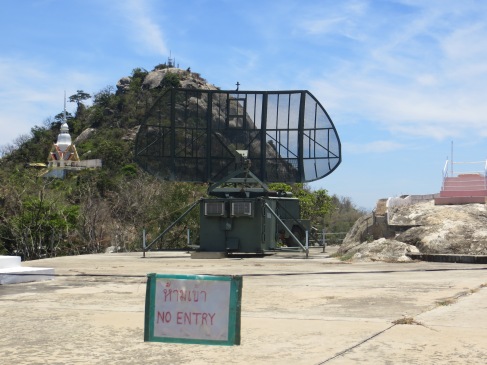 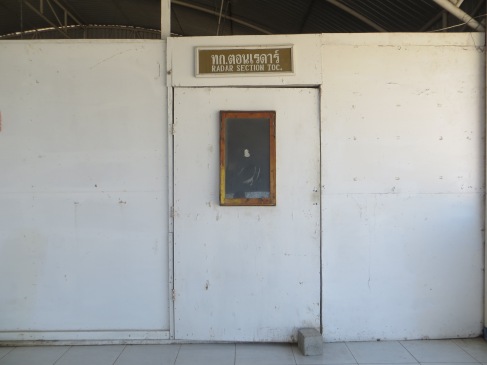 I’m sure if I had read a great deal about Hua Hin before I arrived – or even owned a Lonely Planet – I would have known about Khao Takiab in advance. But not knowing, and then discovering, made it all the more random and cool. It’s definitely worth a visit if you’re down that end of the Southern Gulf.

How to get to Monkey Mountain, Hua Hin: To get to Khao Takiab simply jump on a green songthaew going south, parallel to the beach. The cost for the 7km journey is just 10 baht (£0.20) which you pay to the driver when you get off – take the truck until the end of the line. Alternatively it costs 50 baht on the back of a motorbike. The walk up the hill is free. 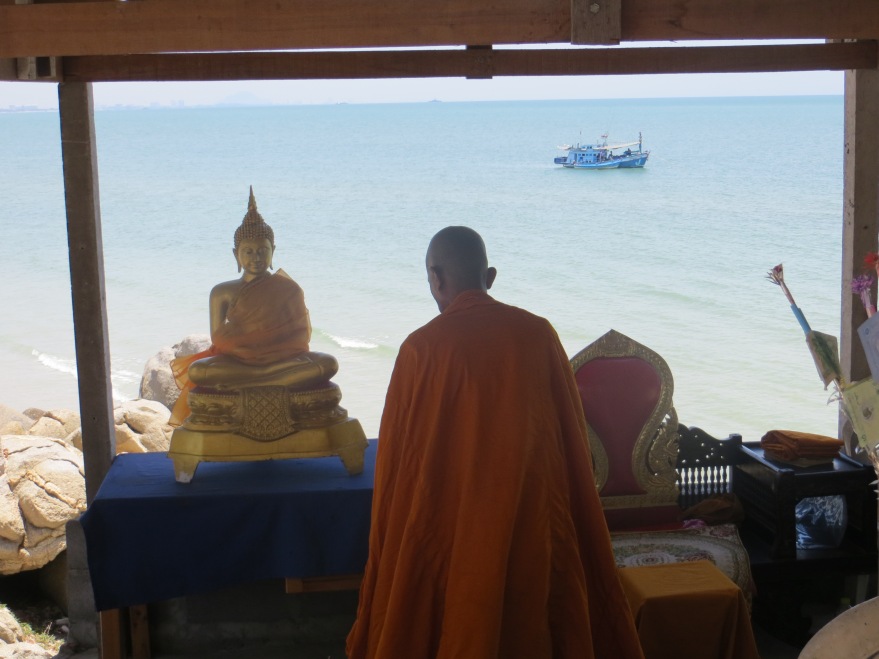