Last Sunday I made my way out to Yushima in east Tokyo – a station one stop from Nezu on the Chiyoda line, not far from Ueno Park. Yushima Tenjin (or Yushima Tenmangu) is Tokyo’s most famous shrine of scholars, and is therefore visited by students all over the city who come to pray for good exam results. Inside the grounds you can see hundreds of ema – small wooden plaques – written by students hoping for entry to the university of their choice. Once a year, the Yushima Tenjin festival is held in the shrine’s grounds marked by drumming, dancing, and excited hoisting of Yushima’s portable shrines, or mikoshi.

Like most matsuris, the streets leading up to the shrine were filled with all sorts of stalls selling everything from chocolate-covered bananas to yakitori (skewered chicken) and takoyaki (octopus balls). Kids tried to win prizes at the shooting range and there were colourful masks and toys for sale. Growing up in Northern Ireland we used to have a ‘Fun Fair’ in the park near my house that would sell similar stuff – I guess carnival games are the same the world over. When it was time to lift the mikoshi, both men and women danced through the streets chanting. This chanting is what matsuris are all about: the community coming together in unison. Photo essay and video below – and don’t forget to follow IKIMASHO! on Facebook.

Like neighbouring Nezu, Yushima is built on slopes, with many little streets and staired-alleyways. These are the stairs leading up to the shrine. You can see a small mikoshi bottom-left. Many local stores clear out their shopfronts and have a little party with the shrine sitting outside. 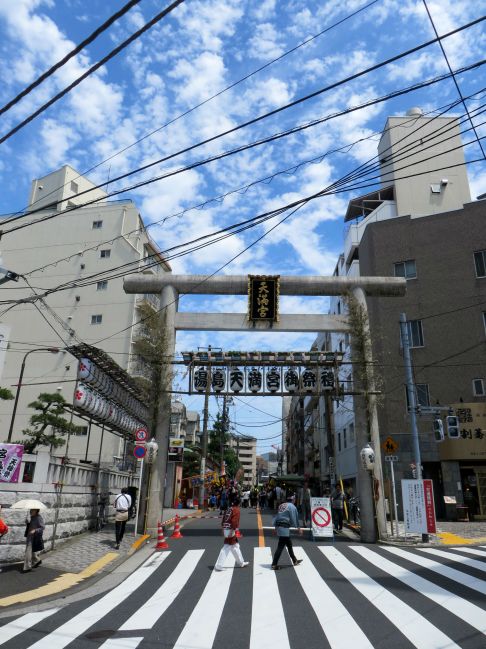 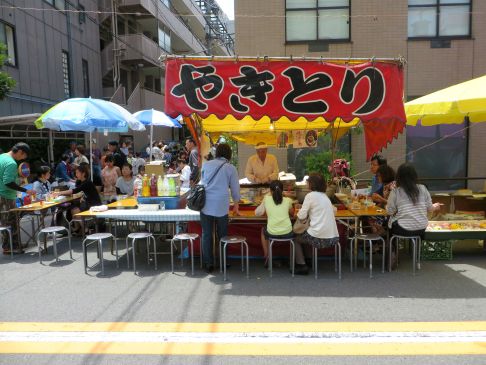 Yakitori (skewered chicken) stall. Food and cans of booze are nearly always 500yen (£3) at festivals like this.

It’s legal to drink on the streets in Japan so nearly everyone is drinking something. It works though – there is never any trouble and people clean up their rubbish. If this was Belfast it would be an utter disaster. 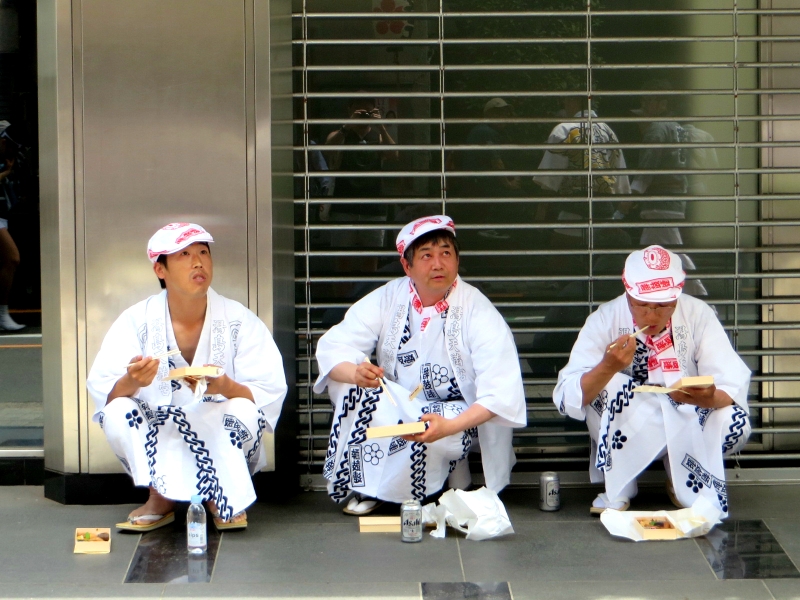 The Three Stooges. I liked the look of their festival bentos but I couldn’t see anywhere to buy one – double layered with rice on top and good stuff below. 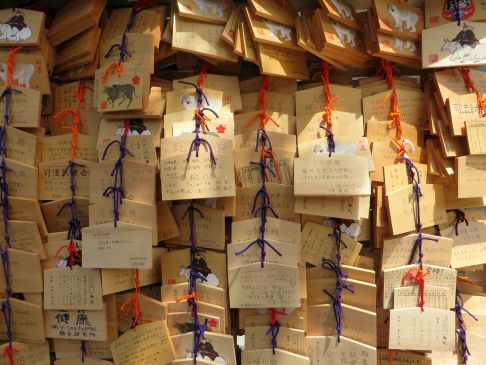 Ema are small wooden plaques on which Shinto worshippers write their prayers or wishes. The ema are then left hanging up at the shrine, where the kami (spirits or gods) are believed to receive them.

People arriving, getting ready to lift the mikoshi in Yushima. 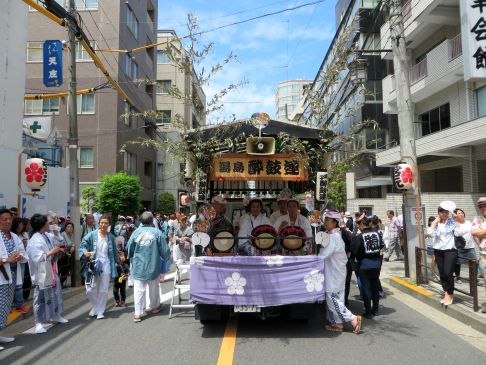 During these events there are little carts decked out in festival attire with a loudspeaker. Inside the truck there are drummers and players of traditional instruments. Usually, for whatever reason, the drummers are older ladies. When the festival begins the cart is sometimes wheeled about to follow the procession. 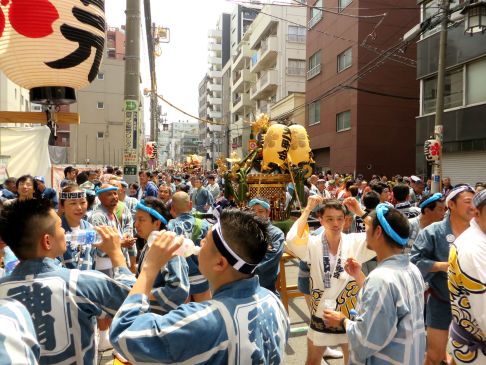 Getting ready to begin. 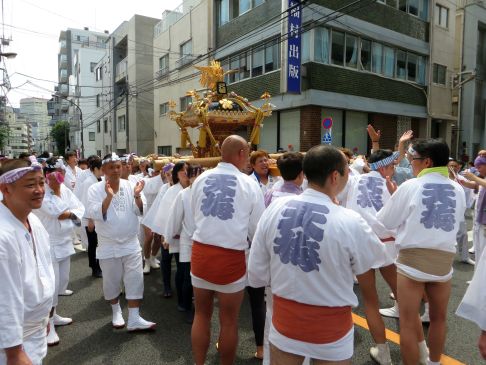 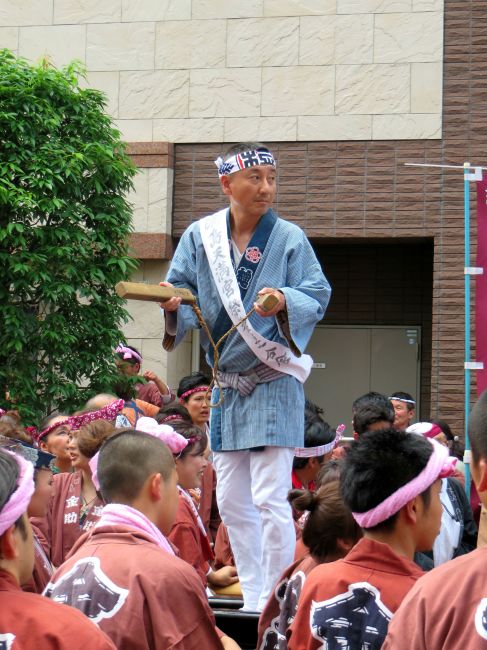 There is a leader of each mikoshi group who stands above the rest. When it’s time to life the shrine he claps two wooden plaques together and everybody claps along in unison. It’s a good sound. 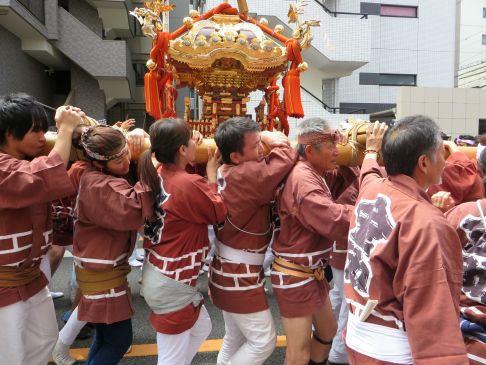 The guy second from the left in this picture was great – waving his arms about and smiling the whole time he was lifting it. Not too heavy this mikoshi in relation to the one-tonne ones you sometimes see, but it still took about 25 people to lift it.

Many photos of these festivals sometimes only seem to show men taking part but there are a large amount of women too. 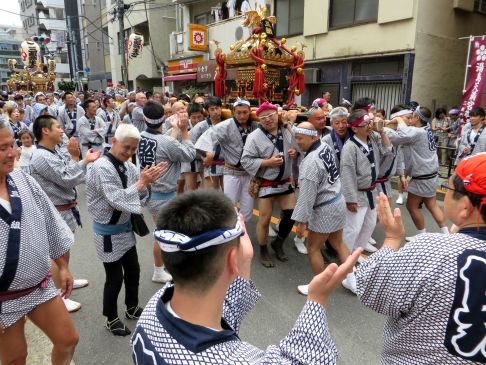 This little girl was crying because she couldn’t carry the mikoshi (portable shrine), so her dad gave her a fan so she could join in with the festivities 🙂 Never seen a frown turn into a smile so quick.

Carrying the mikoshi through the streets 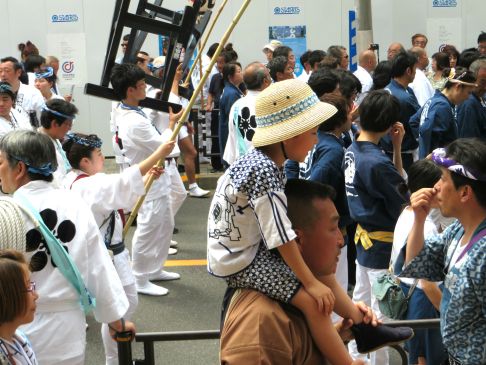 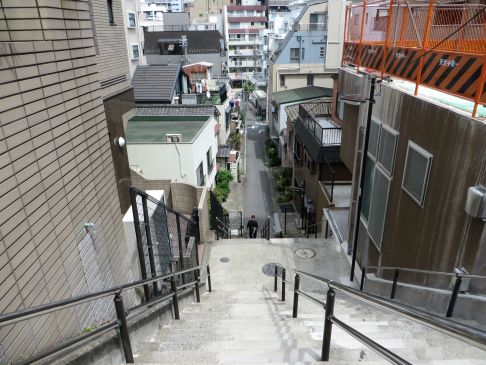 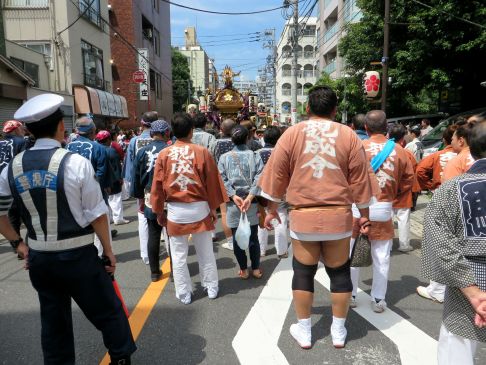