The sights and sounds of the city within walking distance – or water taxi.

I first visited Borneo seven years ago, spending three weeks in the Malaysian state of Sabah with my ex from Northern Ireland. On that particular trip I always remember toying with the idea of going to Brunei, but for whatever reason it just never happened. Perhaps it was because to get to Borneo we had to fly from Belfast to London to Kuala Lumpur to Kota Kinabalu – the thought of any more travel most likely put us off. This time around, however, I had no excuse. Already based in Kota Kinabalu, my flight to Brunei’s capital Bandar Seri Begawan, took just 30 minutes – with the return ticket only costing $60 / £50. As a side note here I have to say that Royal Brueni Airlines is perhaps the best low-cost carrier I have ever flown with. The plane and staff were immaculate – and despite it being such a short flight, passengers were offered newspapers and cold juice. I was also told I could sit wherever I wanted after take-off. It just goes to show that you can indeed run an airline with great service while still keeping the costs low. Ryanair in Europe in particular could learn a few things here. 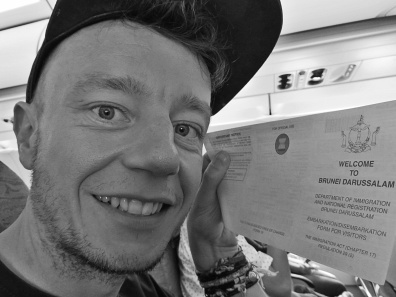 I got chatting to the guy in the row next to me while on the plane. He was from Nagoya in Japan, on his was to Brunei for just one night to meet a friend. Once we landed we both came out into the arrivals hall only to find out we were both staying in the same hotel, the Badi’ah. A driver was waiting to take us to the hotel – always a major bonus when you are arriving somewhere new, allowing you to avoid the logistical worries of getting yourself into town. I still always find it funny when someone holds up my name on a card at the airport, it’s a good feeling! On our short ride back to the hotel our super friendly driver, Atoi, pointed out many landmarks along the way. One thing I immediately noticed was how calm it was compared to Kota Kinabalu. The streets of Bandar Seri Begawan are wide, clean and in great condition. It’s evident that Brunei as a country is financially better off than its neighbours.

Apart from the good reviews I had already read, the primary reason I chose The Badi’ah to base myself in while in Brunei was because of its location. It’s just a fifteen minute walk into the city and Sultan Omar Ali Saifuddien Mosque. Brunei is notoriously infamous for having a limited public transport system, and taxis are expensive. And so to have a hotel that not only picks you up from the airport, but is also within walking distance to the sights is amazing value. Since my flight got in very early my room wasn’t ready yet – but I took advantage of the early hour to dump my bag at concierge counter and take a walk into the city. The best part about the walk is that there is a shortcut through part of the water village and so you are immediately immersed in the culture of Brunei. Following the winding boardwalks I made my way to the mosque and sat in the early morning sun. I had seen pictures of this place online but I was happy to now finally see it in person. (See my pictures of it during sunset here) After a stroll around the city I made my way back to the Badi’ah Hotel and my room was ready.

Waving hello to the Sultan of Brunei

One great thing about his hotel is that it is actually right beside a larger building which has a bank, a supermarket and all sorts of other stuff. It means that the hotel is self-contained, offering you everything you need. There are restaurants just 100m away. My room itself was spotless, with all the things would expect from a good mid-range hotel – the strong wifi was also surprising. Each morning a newspaper was hung on the outside of my door which was a nice touch, and downstairs at breakfast I was able to fill up on fruit, eggs and all sorts of other stuff before going out to explore for the day. Brunei can get very hot in the afternoon and so the outside pool is a welcome relief. 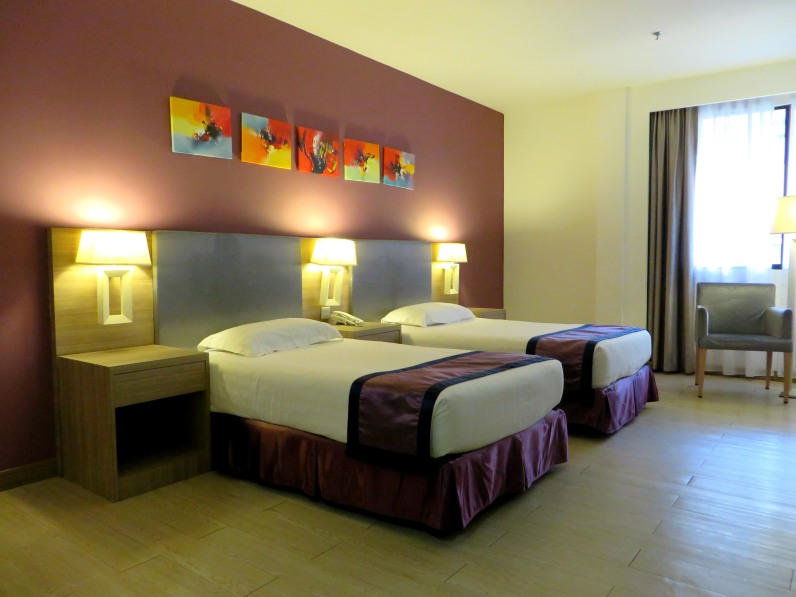 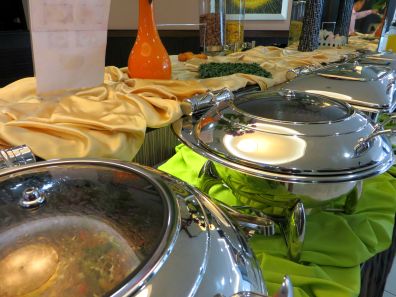 When all is said and done – with free airport transfers, free breakfast and strong wifi, the Badi’ah Hotel is everything you need for your stay in Bandar Seri Berwagan. Make sure you check out the Water Village of Kampong Ayer while you are there, and also visit the restaurant beside the hotel called Thien Thien for the best chicken rice you’ll ever have!