An unusual bowl in one of Tokyo’s lesser-known neighbourhoods

Quite often I find myself in some random part of Tokyo simply because I’ve read about a particular restaurant I want to try. This weekend I ended up in Ojima in Koto-ku – an area which suffered severe damage in the 1923 Great Kanto earthquake, and was heavily bombed during World War II. I’d never been to this area before and enjoyed walking about the quiet backstreets, photos of which I’ll share in my next post. But for this one I want to show you the lunch I had, as it was a little unusual.

Lemon is an ingredient often used in pasta dishes and so I guess it’s strange that it hasn’t been used much in other Japanese noodle dishes before. Japanese chefs prefer to use yuzu, an Asian citrus fruit that has overtones of grapefruit and mandarin orange. And so when I read about a shop that was famous for serving Lemon Ramen, I was curious to try it. 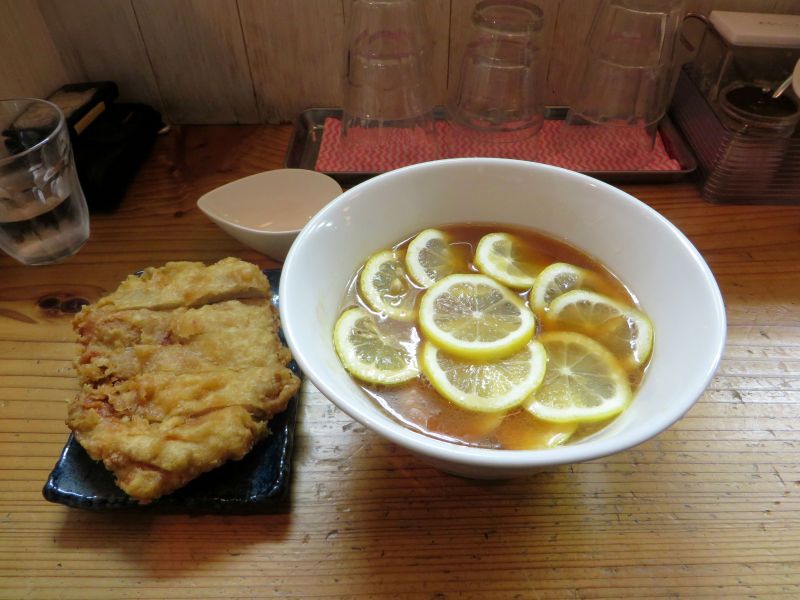 I went for the set that included a huge slab of chicken breast that had been deep-fried. I read online before I came that it would be tempura, but it wasn’t, which was a little disappointing. But it was still good and went well when dipped in the broth. The broth itself, as you would imagine, was very sharp with all those lemons but it managed to work alongside the shoyu base. I was given a little bowl to put the used lemon rinds in but I think I waited too long as my soup became very bitter towards the end. I think if I was to get this again I’d let the lemons sit in there for about a minute, swish them about and then get rid of them. Live and learn.

The shop itself has a very nice atmosphere and is more akin to a trendy cafe than a ramen shop. With the sun shining outside, the inside was equally warm with lots of little ornaments sitting all over the place and colourful plant pots and stuff. The staff were nice too, and I could be wrong but it looked like two brothers running the show. When I arrived at 11:20am there was already a queue of five cyclists waiting to go in: they must have just finished their run (or were just getting started…) and the place filled up pretty quickly. I’d say there were about 15 seats overall, with a few people waiting when I left. I’d recommend this place simply because of the atmosphere, and because it’s a bowl you are unlikely to see very often. Check it out if you are ever nearby 🙂 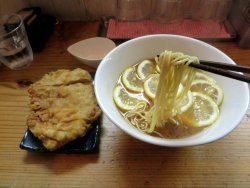 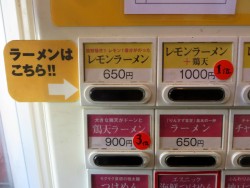 Machine to order from.

Pretty cute from the outside too

Cyclists waiting to go in