Three weeks ago, Mrs IKIMASHO and I packed our bags and headed down to western Honshu for a few days – specifically Hiroshima, the principal city of the Chugoku Region, and Onomichi, a cute port city overlooking the Seto Inland Sea. It was a super fun trip, characterised by copious amounts of food, lots of walking, and plenty of time to relax. I’ll write three blogs in total about this trip, with this Hiroshima one being the first. (The next two will be about our trip to the island of Miyajima, as well as our adventures in Onomichi.) I hope some of the pictures and words featured here will inspire you to visit this part of Japan, or bring back some happy memories if you have visited before.

As far as travel in Japan goes, shinkansen will always be king. The journey from Tokyo to Hiroshima takes about four hours – the same length of time as flying once you factor in getting to the airport and checking in. Granted the shinkansen is more expensive, but it’s by far the most hassle-free way to travel long distances in this country. As I read the novel Silence by Shusaku Endo, the train passed rice field after rice field, with Fuji shyly saying hello on what was a cloudy day. 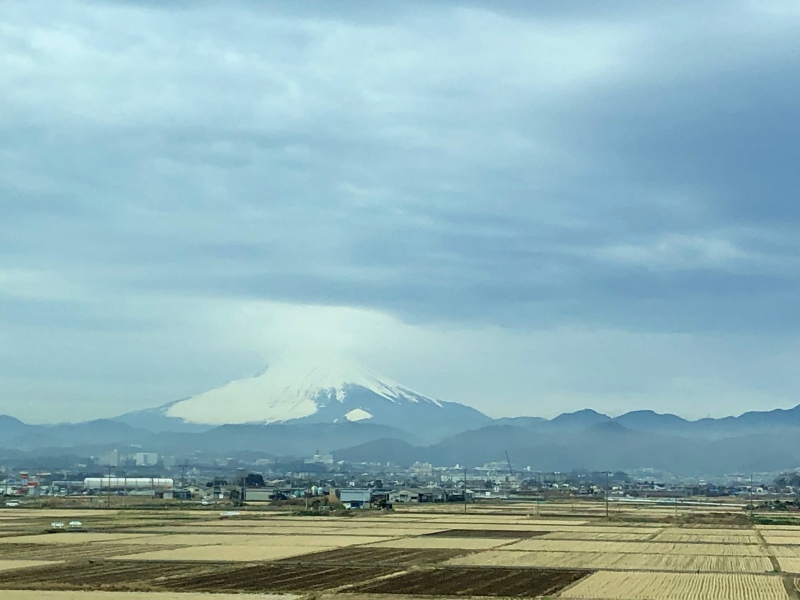 Watching the world go by

We knew from the forecast that Hiroshima was going to be rainy on the first day so at least we were prepared to walk about in the rain a bit. Thankfully, the city has a long network of underground tunnels that connect the Kamiyachō area, so in reality we didn’t have to walk outside that much. Venturing up the stairs from one of the exits, we made our way to Hiroshima Castle, the rain pattering on each of its five stories. Heavy white clouds, combined with the castle’s black keep, almost made the scene look monochrome. 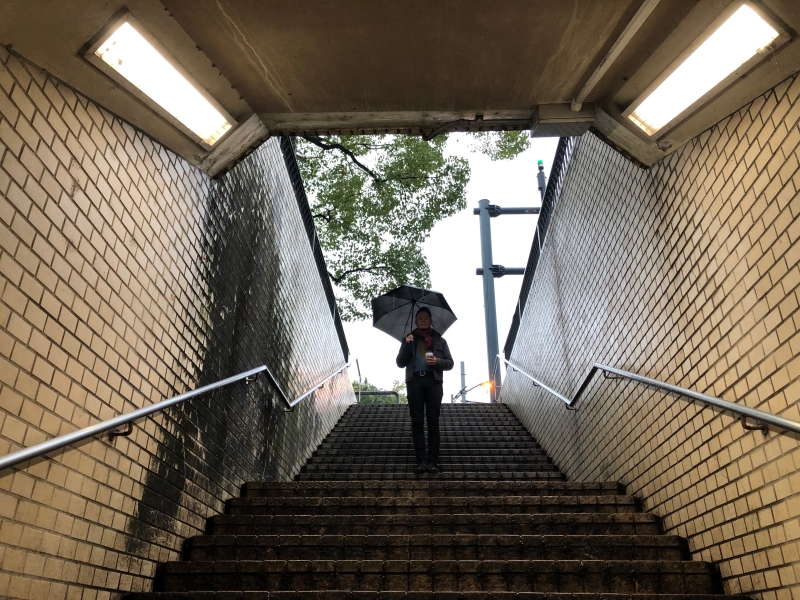 Walking back towards Kamiyachō, we noticed so many trees still bursting with autumn colour despite it being December. Under our shoes, red, yellow and orange leaves sparkled in the rain. With the afternoon coming to a close, we caught a tram back to our hotel and were able to watch the sun come down before heading out for some food. We chose to stay at the Sheraton Grand right beside the station, and the location could not have been better – easy access to the shinkansen, with a good range of restaurants within the station building itself. When in Rome, do as the Romans do. And so we ate okonomiyaki – Hiroshima’s most famous dish.

Autumn underneath our feet

Sunset from our hotel, the Chugoku Mountains rising in the distance.

Okonomiyaki sizzling on the griddle. We sat by the counter, happy to people-watch, but equally unhappy when we got back to the hotel and realised our clothes stank! 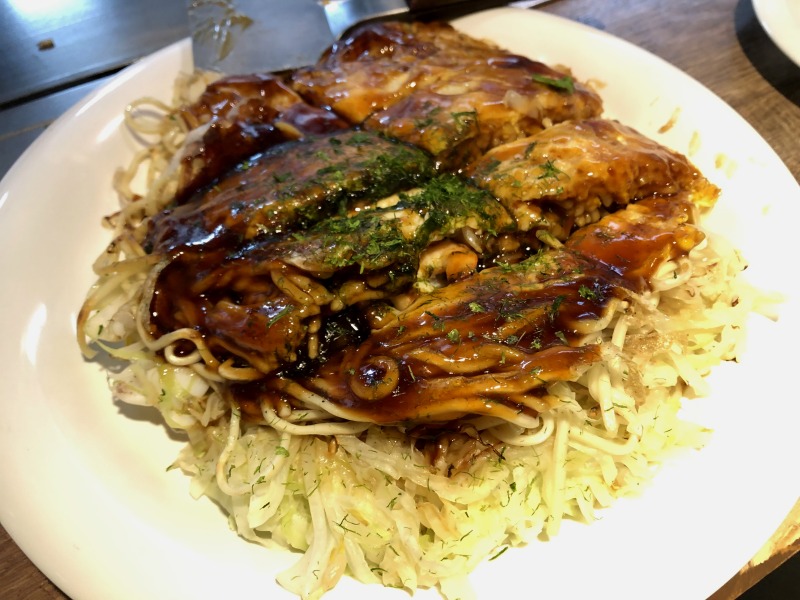 Hiroshima’s most famous food. The local version of the dish features a generous amount of cabbage on top of yakisoba noodles. We went for the grilled squid variety that had some chopped-up squid throughout it. (That brown stuff on top is okonomiyaki sauce – basically ketchup, worcestershire sauce, oyster sauce and sugar.) Oh, and then you also slather it in mayonnaise and fish flakes!

Queueing up at the restaurant, a funny thing happened. We didn’t realise that we had to go to a vending machine first and pick up a ticket before lining up. Once we noticed, Mrs IKIMASHO quickly went to grab a ticket while I held our place in the line. Of course, wouldn’t you know it, as she was grabbing our ticket, one of the staff came down the line checking if everyone had theirs. I played the dumb foreigner card, telling her not to worry and that my wife was getting our ticket now. The woman wasn’t having any of it, and booted us to the back of the line. That was me told.

We woke up to blue skies the next day. Central Hiroshima relies heavily on a tram system as opposed to trains and so we worked our way across the city to the Atomic Bomb Dome and Peace Memorial Museum.

Off out for the day. Someone never knows where to look…

On board one of the many trams in Hiroshima

For those of you who may not know, the Atomic Bomb Dome is located almost directly underneath the explosion of the first atomic bomb in human history. Somehow, the structure avoided complete destruction and the remains of the building still stand today. The residents of Hiroshima decided to keep this tragic reminder of war intact – and just as we arrived, a rainbow shone across it. It was a poignant moment.

A rainbow shining over the A-Bomb Dome

Visitors to the Peace Memorial Park will see brightly coloured paper cranes everywhere. This connection between paper cranes and peace can be traced back to a young girl named Sadako Sasaki, who died of leukemia ten years after the atomic bombing. Sadako was two years old when she was exposed to the A-bomb. She had no apparent injuries and grew into a strong and healthy girl. However, nine years later when she was in elementary school, she suddenly developed signs of an illness and was diagnosed with leukemia. Believing that folding paper cranes would help her recover, she kept folding them to the end, but on October 25, 1955, after an eight-month struggle with the disease, she passed away. 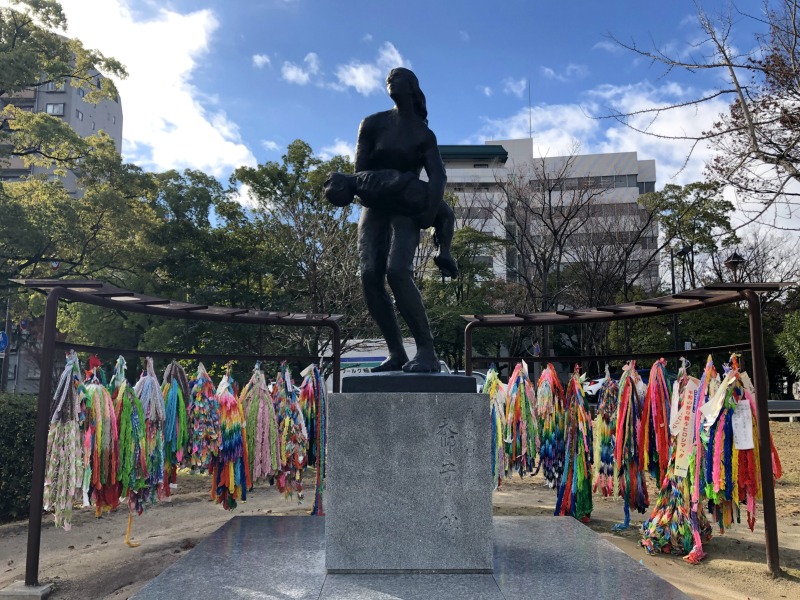 Paper cranes hanging inside the Peace Park. Millions are brought here by people every year.

As a city, Hiroshima surprised me with its openness. I guess I’m just so used to Tokyo’s narrow streets, and that wide four-lane roads have become somewhat of a novelty now. More than anything, I liked how you could step on a train and feel like you were in the middle of nowhere after just 30 minutes of leaving Hiroshima station. Saying that, just like in Tokyo, my eyes were mainly drawn to the little urban areas and shops: the storefronts that serve daily life, and the people who work there. In that respect, Hiroshima was no different from the nation’s capital.

The Japanese storefronts I love so much 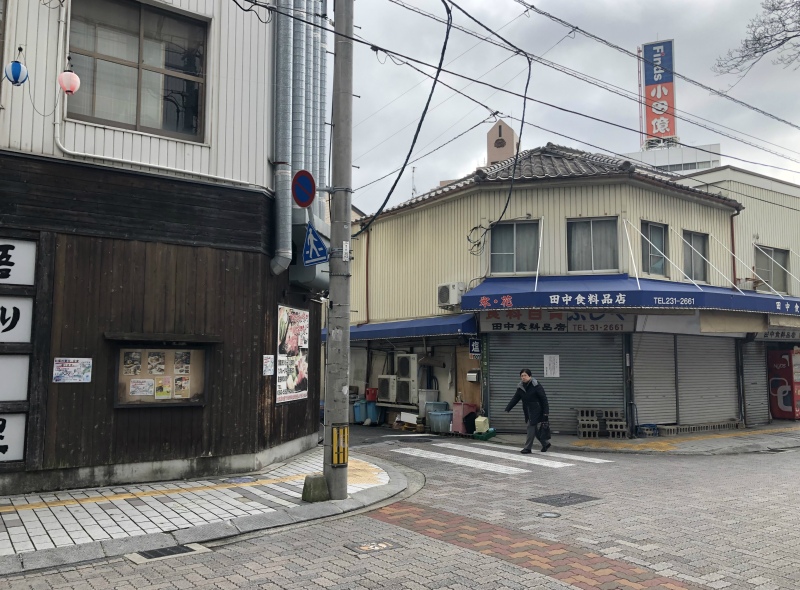 A very quiet area of the city 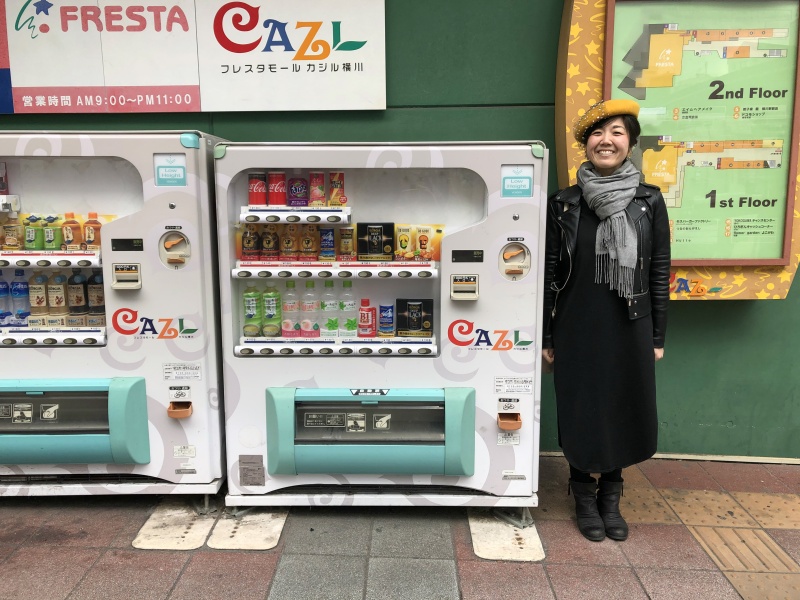 At last! Mrs IKIMASHO found a vending machine suited to her height 🙂

This bookstore down a dark arcade was crazy – look how faded all the books are. I don’t think I have ever seen so many shades of brown and beige in one place.

Large signage outside a quiet station

Admittedly, both of us don’t venture out super late at night anymore, instead preferring to get up just after sunrise and make the most of the full day ahead. Early evening suits us best, and we enjoyed wandering up and down some of the city’s backstreets, peering though the windows of small bars and hearing the clinks of glasses inside. It was also nice to see Christmas illuminations still up in some of the long shopping arcades that seemingly went on for miles. 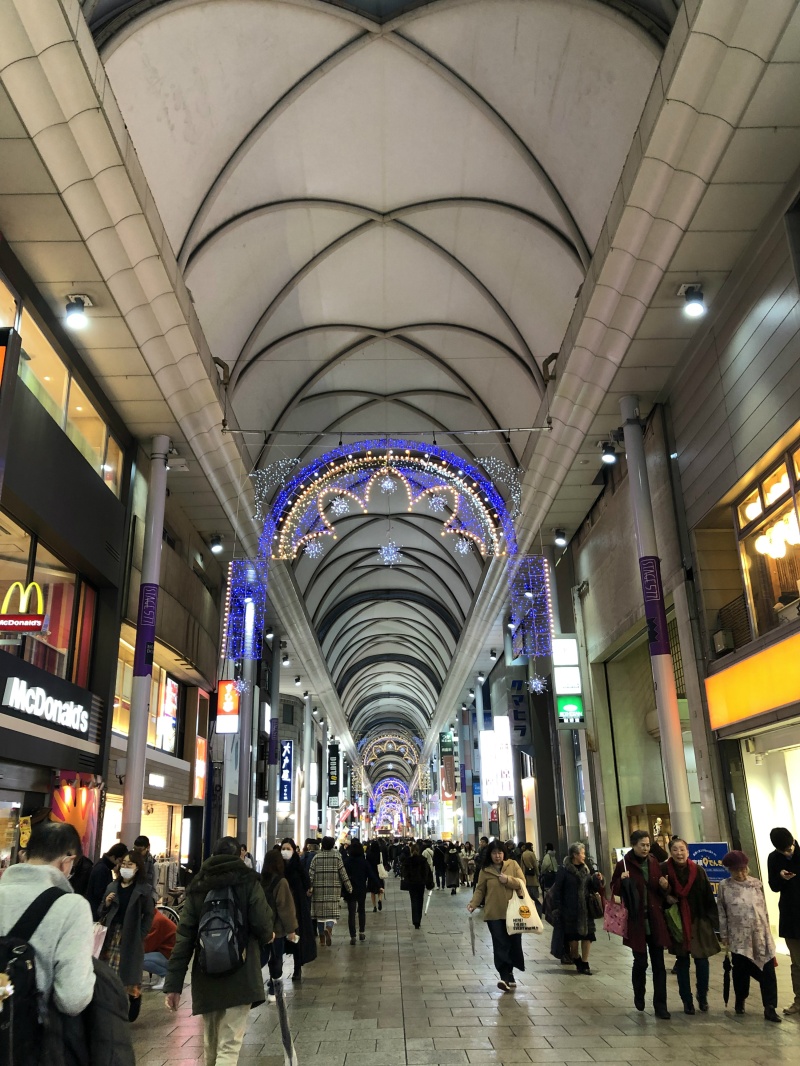 Christmas lights in a covered arcade that stretched on, and on, and on… 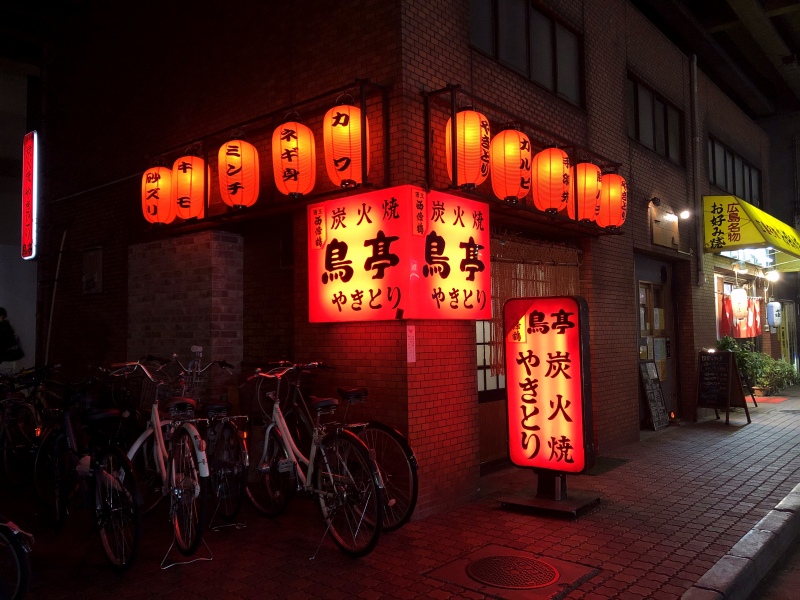 I love how the red glow spilled over onto the pavement 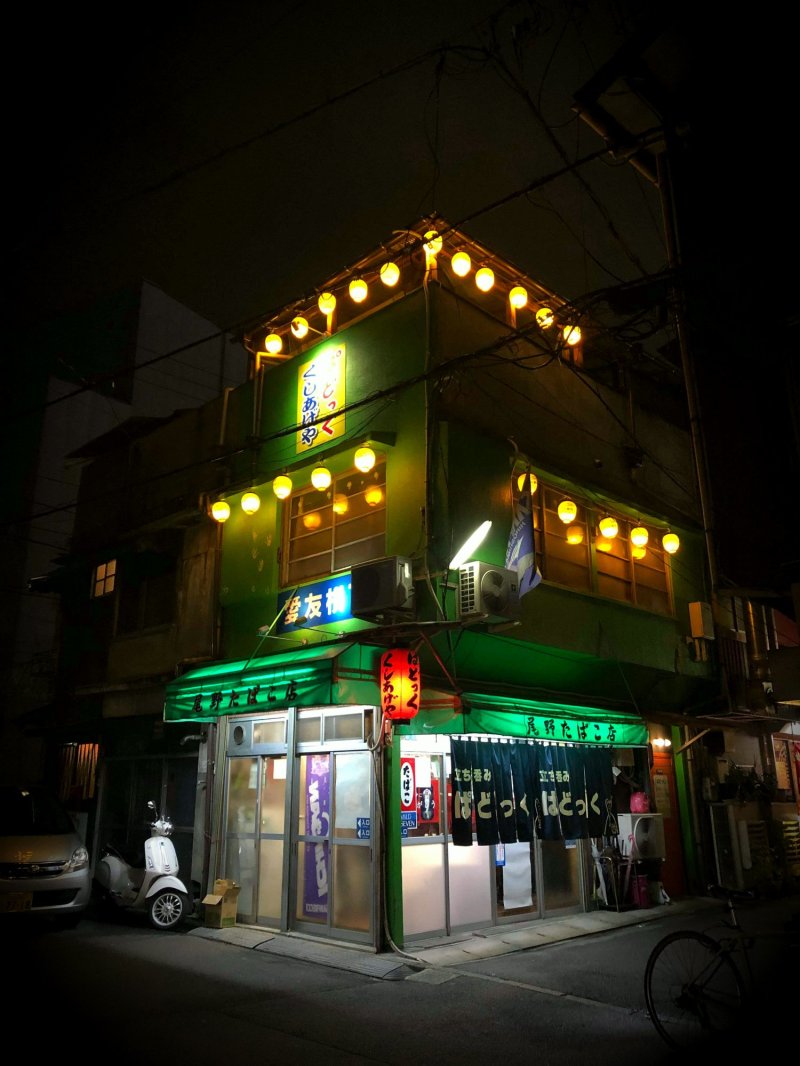 The beauty of wandering around Japan at night 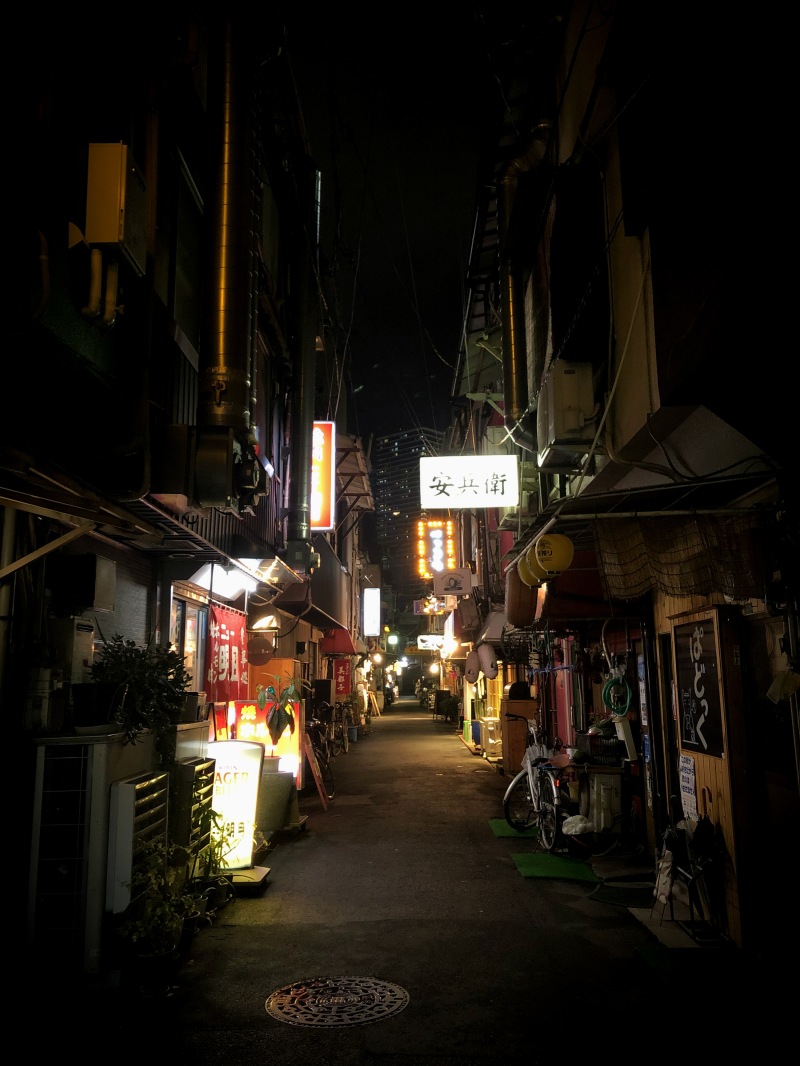 Getting lost down alleyways

The next blog from our trip will be about our small day trip out to Miyajima – rubbing shoulders with the deer who roam the island.