Introducing OMEILAND, the extreme noise crew destroying Tokyo one scream at a time…

Omeiland [ 汚名ランド ] is an extreme noise crew based in Tokyo. Their chaotic public appearances are visually and sonically violent, regularly shut down by the cops when things get too extreme. I randomly saw Omeiland ‘perform’ last night as I was walking to Shinjuku station. The look on some of the unsuspecting pensioners’ faces was as expected.

Japan is no stranger to the harsh, dark world of noise and power electronics. Merzbow is arguably the biggest noise artist in the world, while Hanatarash will forever be remembered for the time they drove a backhoe bulldozer through the back wall and onto the stage.

Hanatarash was notorious for its dangerous live shows. Some of the band’s most infamous shows included cutting a dead cat in half with a machete, and strapping a circular saw to the frontman’s back and almost cutting his leg off.

At a 1985 show in Tokyo’s Superloft, the audience was required to fill out waivers due to the possibility of harm caused by the show. The show was stopped due to the band preparing to throw a lit molotov cocktail onto the stage. The performance cost ¥600,000 (approximately $9,000 US) in repairs. After several years of intense live shows, Hanatarash was forbidden from performing at most venues. Not much of a surprise, really.

If you’re into this kind of thing, and want to have your brain flossed with intense white noise, you can find some info about upcoming power electronic gigs in Tokyo here.

Or if you’d prefer to pollute your mind from the comfort of your own home, check out this video playlist here. 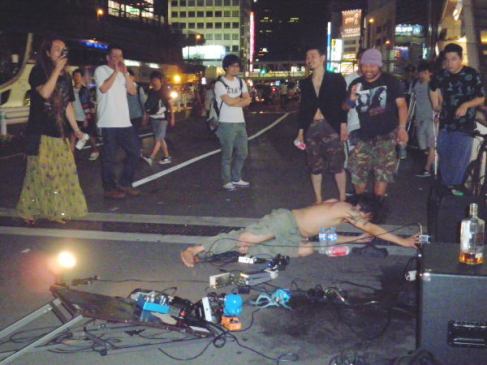