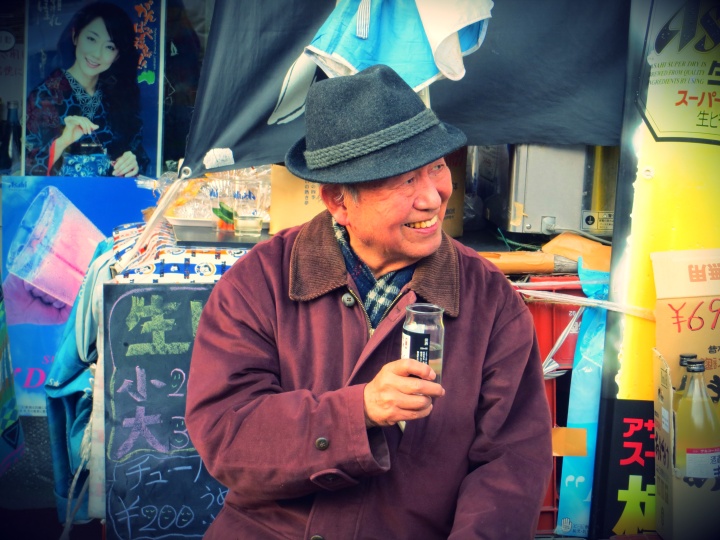 A stroll around one of Tokyo’s oldest neighbourhoods.

This is Yanaka, a low-key residential neighbourhood in eastern Tokyo. Hidden amongst steep hills and narrow alleyways, it was miraculously spared the carnage of the Allied bombings in World War II. These days, its old-world charm offers a reminder of what Tokyo used to be like before the city was baptized in neon.

A little old lady sits alone, content, sipping on a cup of sake.

As I was walking through the back streets I came across a bunch of old-timers teaching children how to play with Japanese fighting spinning tops, or ‘Kenkagoma Koma’. This guy in particular was great, a piece of dried octopus constantly hanging out of his mouth and a look of deft concentration on his face.

This guy was ready to do battle. Once the string is wound, the tops are “thrown”, and some skill is necessary to give a top a proper spin and to cause it to land within range of an opponent’s top. Once engaged, a pair of fighting tops will crash and bang into one another until a victor is declared when either one top stops moving or has been pushed outside the designated game area.

This guy won and was happy. At one point a kid offered him some dried octopus but he just pointed to his mouth, indicating that he had no teeth to eat it. The whole atmosphere of the street was lovely, and it was nice to see kids doing stuff that didn’t involve a bloody iPhone. Yanaka is a place where old Tokyo still remains – and it’s a great place to go, clear your head and immerse yourself in what I would call the real Japan.

From Nippori, Yanaka Ginza is a 5-10 minute walk west of the station. Alternatively you can take the chiyoda line to Sendagi and walk east for about the same amount of time. You can also walk from Ueno Park in about 30 minutes – although it may be quicker if you are in a pram like this guy.