Becoming one of the family. My experience as one of the locals in Broken Road.

For the last few weeks I’ve been living in a small village called Broken Road in Nang Rong, the Isaan province of northeastern Thailand. Just 40km from Cambodia, it’s where my mates Allan and Fanfan now live with her mum and a few others of her extended family. Allan is originally from my hometown of Bangor in Northern Ireland, though bought a condo in Bangkok in 2008 and has been living in and out of Thailand for the last seven years: solidly for the last four. Allan and Fanfan were married in Bali in 2012, but decided to lease their Bangkok condo a while back and move out to the sticks for a change of scenery. The money they make off the condo funds their life out here many times over, meaning they can now save money for future travels. As well as continuing to run their own site, Live Less Ordinary, Allan and Fanfan are in the process of starting up a new venture – Isaan tours – where people can come and experience a lifestyle that many do not know about or get the chance to see. This is some of the stuff that goes on in a normal day in Isaan, rural Thailand.

Fanfan, Allan and me with the lead monk from their local temple during Songkran.

The day revolves around food, with mae (Fanfan’s mum, pronounced ‘Meh’) rising at 5am and making a racket downstairs preparing stuff for the day ahead: cracking coconuts, grinding spices into a paste and getting the rice underway. No one ‘works’ in the traditional sense here. Meh is semi-retired, Fanfan is studying, and Allan works remotely online. With none of us having to get up and go to work, that means the whole day is essentially free time. Saying that, there is always stuff to do around the house: picking vegetables, cleaning up, chasing away big spiders and so on. Every day is different. We sit down about 8am or so and eat our first meal of the day; again at around 12pm and then again 5pm. There are no real set times though. Eat when you’re hungry. Different dishes are prepared throughout the day and left on the kitchen table. What we don’t eat at breakfast, we finish at lunch, and so on. I normally eat a lot, but even for me the sheer variety of stuff on offer is mind blowing. In the course of a day living here it’s not unusual to eat ten different dishes, all homecooked and amazing.

Lemongrass grows outside the house on the street. It looks like weeds. Above the lemongrass is a kafir lime tree. There’s galangal, fingeroot, chilis, bananas, coconut. All the ingredients the family needs are right here under their nose; they live off the garden. The only thing that needs to be done is to cycle down to the local market nearby and buy some meat or fish. In the neighbouring house, family member Yai Thip is also continually cooking: deep frying chicken and fish in oil over a rustic charcoal fire. It’s the best fried chicken I have ever tasted. During the course of the day, Yai Thip will appear carrying more food – plates of sliced deep fried bananas and other amazing treats. I have yet to feel hungry in this house. (Even as I type this I have been brought a pomegranate, a load of Thai plums, a bowl of caramelised gooseberries, Isaan sausage, corn on the cob and a slice of cake to eat. I can’t keep up.)

Collecting berries in the front garden

With daytime temperatures reaching the dizzying highs of 37 degrees, when the sun finally begins to set we emerge from the house to sit on the balcony with its welcome breeze. We bring the charcoal fire up with us and eat mookata: pork BBQ cooked on top of a skillet surrounded by a broth with vegetables. We sit up here for two hours working our way through 2kg of meat, drinking beer and sipping Lao Khao, a cheap and potent rice whiskey.

Generally speaking when I travel I go to bed even earlier than usual, although here in Isaan we take it to the extreme: going to our rooms most nights at 7.30pm so we can get up at 5am. The oppressive daytime heat means it is better to do things at dawn and dusk when the weather is cool. It’s also the best time to experience local life as this is when everyone else is active too. Each morning at 6am monks from the local temple pass by the house with their alms bowls for bintibat – collecting food that they will eat that day. (Monks only eat two meals a day, breakfast and lunch). We quietly sit waiting for the monks who bless us, balancing our karma. 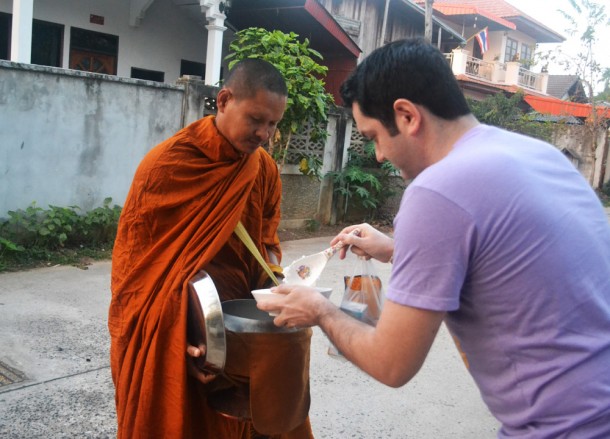 On one particular day we rise at 5am and head out on our bikes before sunrise. As we cycle along dirt tracks locals eye us suspiciously and then smile: farang (foreigners) are just not a common sight round these parts. We take off in to the rice fields and come across a traditional Isaan house: two stories with the bottom left empty for storage and so people can lie about in the shade. A farmer wearing a sarong is herding cows into an adjacent field and we stop to chat to him for a bit, with him telling us how he will rear the calves until adulthood and then sell them on for as much as 40,000 baht (£800). Geese flap around nearby, as well as a flock of ducks. With the sun coming up and the mist rolling off the grass, it really does feel like we are in the middle of nowhere.

A farmer brings his cows out to graze at dawn

One morning we decide to get in the car and visit the temples of Phanom Rung and Muang Tham. Phanom Rung is a Khmer temple complex set on the rim of an extinct volcano dating back as early as the 10th Century. The architecture is similar to that of Angkor Wat in Cambodia. Inside the dusty grounds of Phanom Rung we see a scorpion on a wall, overlooking a lotus pond. “Be careful, scorpions can jump.” Allan tells me. Lies of course, but it still makes me edgy. This particular breed is an elephant scorpion – and while I have handled tame ones in Malaysia before, this is the first time I’ve ever seen one in the wild. Despite being a Hindu temple, some Buddhist monks are visiting, and as always their orange robes and serene nature make the backdrop even more impressive. At nearby Muang Tham we climb the steps in the heat and can see the fields of Cambodia down below.

Fanfan and her mum at Phanom Rung 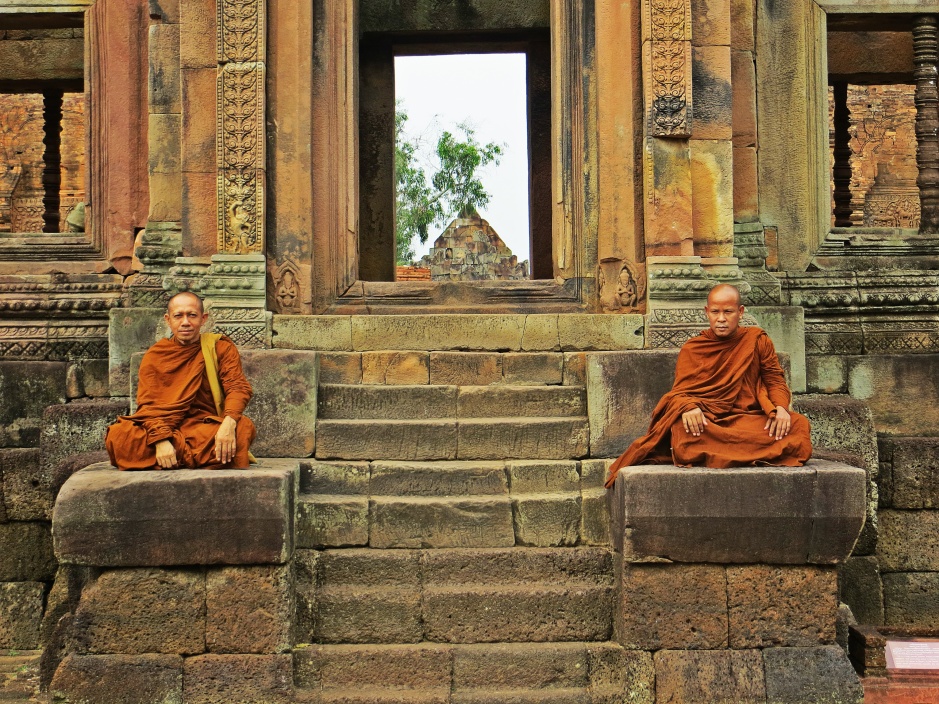 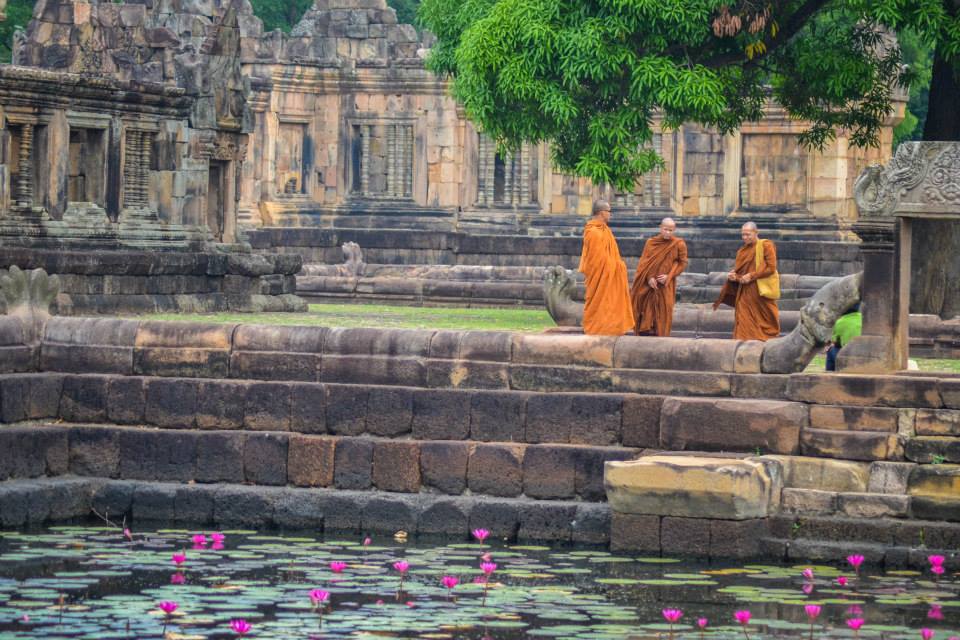 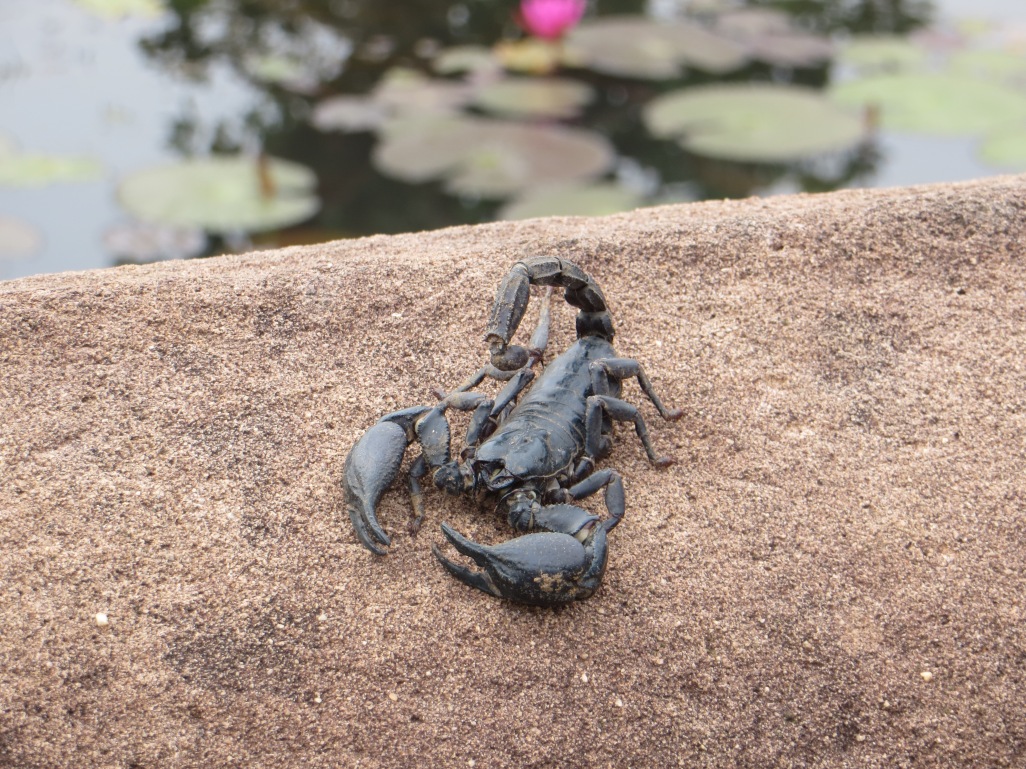 The Khmer ruins of Muang Tham

Hanging about the house

Every day is different, and it’s the little things that make each day so interesting. If Meh wants to prepare a desert for later that day, we will be out on the road climbing up a tree and gathering berries. Allan tells me how he once found a frog in his closet, and their granddad actually had a king cobra inside the house. One day while I was there Fanfan was moving the washing machine out to do some laundry and uncovered a huge spider – all of us crowding round it not really knowing what do do. Spraying it with a hose, it scarpered, but I think to this day it’s the largest spider I have ever seen crawling about in the wild. To top it all off, a guy walked past the front window walking an elephant down the road and no one even batted an eyelid. 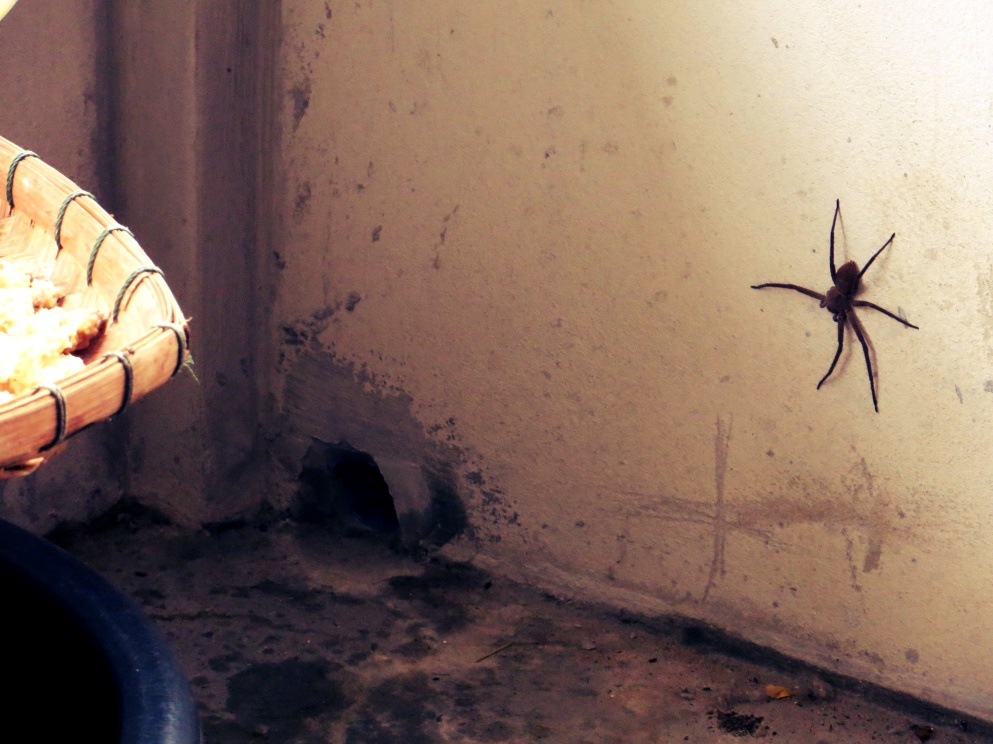 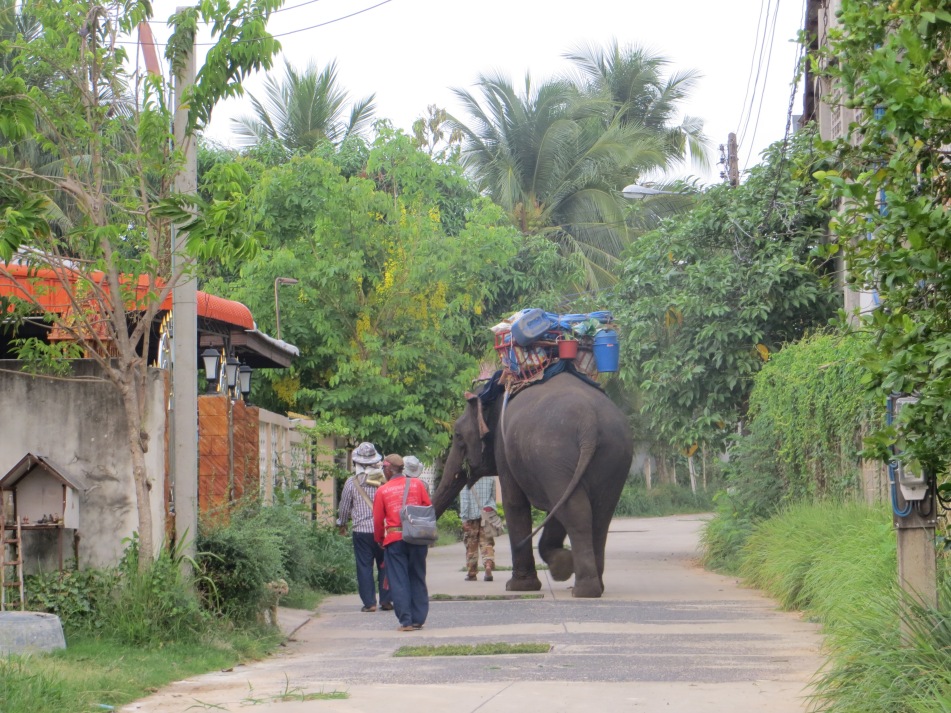 An elephant walking down the road.

Lazing about one day we went over to Ya Thip’s house to see what she was up to. As always, her betel nut pouch was sitting on the bench and Allan asked me if I wanted to try. Common all around SE Asia, the areac nut is commonly referred to as betel nut, as it is often chewed wrapped in betel leaves. It acts as a mild stimulant, causing a warming sensation in the body and slightly heightened alertness, although the effects vary from person to person. For me the experience was a good one: I enjoyed watching the preparation, and the actual chewing of the stuff wasn’t too bad: it had a slight aniseed taste, gave me a bit of a buzz and I could see why it could become quite addictive. Like chewing tobacco, you spit out the juice which is bright red. That’s why so many people in SE Asia have red/black teeth – Yai Thip included.

Fanfan’s granddad, Ta, lives next door. His wife – Meh’s mum and Fanfan’s grandmother – died just two weeks before I arrived. Still in mourning he tells us how he misses her, yet still finds the kindness in his grief to bless me during my trip, tying a symbolic bracelet around my wrist. We could not speak each other’s language but I feel we connected, and I hope he finds peace. I’m happy that he is surrounded by Meh, Fanfan and everyone else during this time.

A blessing from Ta

It will be sad for me to leave Broken Road. As well as saying goodbye to my friends, Meh and everyone else, I’ll not just leaving the village behind but that way of life as well: taking the bus back to Bangkok and to the city grind. Living out here, even for a short time, has made me think about what I want out of life and the type of lifestyle I want. I’m extremely grateful to Meh, Allan and Fanfan for having me, and I have already told them I would like to come back this year at some point.

You can not experience this type of life without having people on the inside. I’m very lucky to know these guys, and without them there is absolutely no way I would have had this experience the last few weeks. The video below is a simple reminder of the times we shared, and I’ll also be writing about our experience of Songkran together.