The coffee incident happened in Mirissa – a town on the deep south coast of Sri Lanka. There’s nothing there apart from beach huts and restaurants. So I had a choice: go east to Matara or west to Weligama: both bigger towns but nothing to write home about. After chatting to a guy on the street, he told me my best bet would be Weligama as they are Muslim. The folk in Matara are Buddhist and don’t open their doors on a Sunday. So Weligama it was: jumping on a bus that cost 20 rupees (10p) for the 8km journey.

Because it was Sunday at about 10am the bus was pretty quiet but that didn’t stop the driver driving at about 90mph and honking his horn at every opportunity. Anyone who has travelled across Sri Lanka on these things will attest to the fact that they are lucky to be alive. If you want the bus to stop you stand at the side of the road and hold out your arm. Most of the time it doesn’t even stop, just slows down, and so you have to jump on through the back door. On more than one occasion I’ve had to grab hold of an old lady so she doesn’t fall out the back.

Weligama is a quirky little place. Just another Sri Lankan town catering for the locals with not many foreign visitors. A random guy came up to me and asked what I was doing, and when I explained the coffee incident he took me to a repair shop that was closed. Then he took me to a phone shop. When I explained that a netbook isn’t a phone he told me “both use electric” so maybe the phone guy could help. He couldn’t. Eventually I gave up and just started walking about the town. 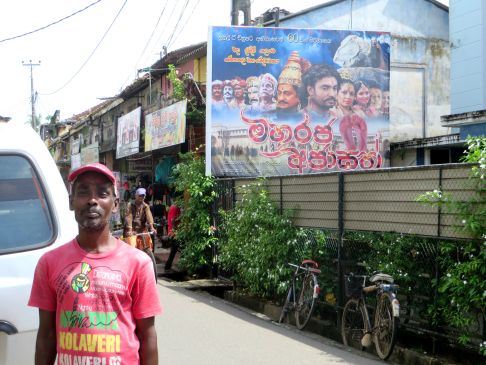 Which is when I found this guy. I liked the billboard in the background and when I was about to take a picture of it he ran up in front of it and just stood there. He wasn’t even really smiling, he just wanted to be in the picture. So I took the shot, shook his hand and off he went.

Just as I was about to get the 10p bus back home I spotted a repair shop at the end of a road near the beach. I went in and the guys looked like they knew their stuff. Within minutes he had dismantled the netbook and was fiddling about with it. I asked him how much it would cost to fix and he did that Del Boy thing of stroking his chin and saying something to the equivalent of “depends what’s wrong with it, mate.” ie. whatever I want to charge you. I sat about for a bit but then he told me to go away and ring him in about four hours. So I took the 10p bus back to my guesthouse, lay on the beach then phoned him at 2pm. “Good news! Your computer is ready to be picked up!” he said. “Nice one, is it fixed then?” I replied. “No,” he responded. Here we go again… 10p bus back into town.

Where I met these guys in an alley. 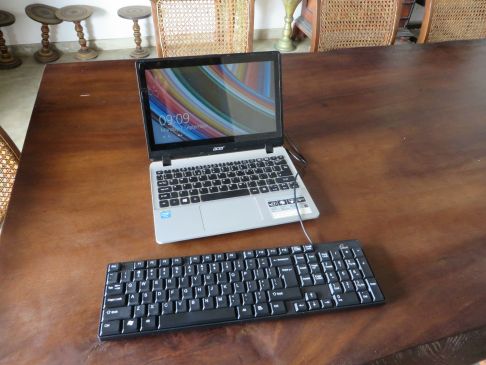 When I got to the shop the guy said he had cleaned up the computer and the hard drive, dried it out and serviced it. So he did fix it after all! Only the keyboard is totally and utterly screwed. Doesn’t work at all. So now I have to type using this ridiculous setup until I find a larger town to try and replace the netbook keyboard. I just wonder how many 10p bus rides that will involve…

THE #1 RULE AS A TRAVEL WRITER: LAPTOPS & LIQUIDS DON’T MIX