Getting my ramen game back on. Eating ramen awarded a Bib Gourmand by Michelin.

Ramen Walker is a website which specialises in reviewing, rating and generally being a know-it-all when it comes to ramen restaurants in Japan. Right now there are over 57,000 listed on its database, and as it turns out, No.20 on the list – Konjiki Hototogisu in Hatagaya – is just a ten-minute cycle from my house. As well as being rated highly by Ramen Walker, it was one of 10 ramen restaurants awarded a Bib Gourmand by Michelin in 2016, the level just below Michelin Star. And so this weekend I jumped on my BMX and headed down to take a look.

The only reason I spotted Konjiku Hototogisu at all was because of the line of people queueing up outside the shop. If it hadn’t been for them, I would have had to ask someone where it was. Being a Saturday afternoon, I knew I would have to wait in line but was pleasantly surprised when I only had to wait 20 minutes. Good thing too, as snow was forecast – and while I wanted to try this place, I wasn’t willing to turn fully Japanese by waiting outside a restaurant in the pissing rain and snow. It seemed most eating there were couples, and so when two people left the shop, two more were allowed to enter. The guy in front of me was also flying solo and so I started up a conversation with him in Japanese. I asked if he had been before and if he could recommend a particular dish to try. He said it was his first time, but that they offered shio (salt) and shoyu (soy) varieties. I explained that I was a little nervous, as highly regarded ramen shops like this can often be somewhat intimidating: usually never any foreigners, all kanji etc etc. He explained that he was nervous too – but only because he was looking forward to trying the ramen!

Line outside the shop 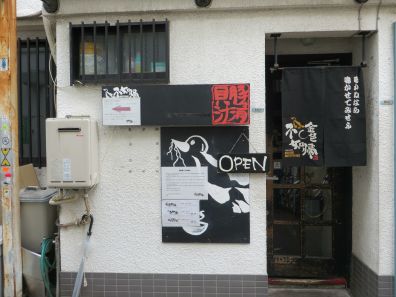 Shop itself. No queue when I left. Sod’s law!

When it was our turn to enter we chose what we wanted from the ticket machine and were seated. There were only two staff and they worked in harmony, creating two bowls at a time. It takes a lot of skill to do this all day in such an enclosed space – and as is the case with many reputable ramen shops, the atmosphere was pretty tense. No one talks, not even the staff, and so you sit there in silence watching them work before you are given your bowl. It was very good. I have to admit that for a long time I had gone off ramen completely, having eaten too much of it. I found some of the stocks to be overpowering and so I went a year or so having it only a few times. So this first bowl went down well, and I was glad I came somewhere good to get it. I couldn’t quite place what the flavour was, but after a bit of research online I found a review that states “the broth is made from two types of soy sauce and three type of shellfish, and flavored with an oil made from porcini mushrooms.” The soup was smooth and full of flavour, and the egg cooked to perfection, soft and yellow inside. I ate fast but the guy I originally came in with finished before me and left – I don’t know how Japanese people eat so quick! 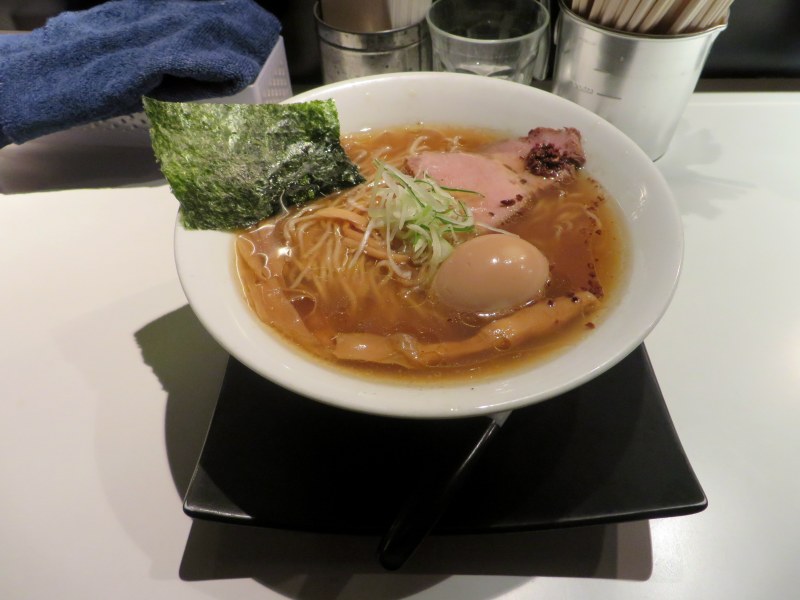 So this was my Saturday afternoon. For most people in the shop, they were just getting a quick lunch but for me it was a bit of an adventure. From initially finding the shop online, cycling through a new area to get there and then queueing up, it was all an experience. That’s why I like living in Tokyo: the smallest thing such as getting lunch can turn into something interesting. I know that if I am ever at a loss for something to do all I have to do is look up a ramen restaurant that has great reviews then make the trip there either by bike, bus or train. I’m guaranteed to see a new area, try new food and always have something to do. I’m sure I’ll have more ramen adventures in the coming weeks.