A rare glimpse into the art and culture of one of the world’s most intriguing countries.

A few weeks back I was invited along to the Ueno Royal Museum in Tokyo to check out its latest exhibition of art and relics from the Kingdom of Bhutan – a country I’d love to go to. Unfortunately, the only time I have ever seen the Himalayas was from the window of an airplane as I was evacuated from the earthquake in Nepal. But Bhutan is a country that has always fascinated me – I think even more so because there are certain restrictions on how you are allowed travel to the country. Bhutan is fiercely protective of its culture and environment, well aware of the damage that huge amounts of visitors can cause.

This article was published on Tokyo Art Beat. You can read the original here.  All images of artefacts are ©National Museum of Bhutan and ©Royal Textile Academy.

The Bhutan Exhibition – Hint to Happiness

A rare glimpse into the art and culture of one of the world’s most intriguing countries.

With 19.73 million foreign visitors last year alone, Japan’s tourism industry has never been stronger, and these figures are set to rise in the run-up to the 2020 Olympics. An increasing number of tourists, however, isn’t always a good thing. Just this May, Koh Tachai – an island off the west coast of Thailand – was officially closed to tourists for fears of irreversible damage to the island’s coral and ecosystem. As far as tourism goes, there is a fine line between wanting to promote your country, and ruining it in the process.

One country that has always been acutely aware of the very real threat of tourism to its culture and environment is the Kingdom of Bhutan – a landlocked nation at the eastern end of the Himalayas bordering both China and India. By placing certain restrictions on how you travel to the country, it manages to maintain its cultural integrity – ensuring tourists get to see the real Bhutan, not a diluted version packaged and sold for the mass market.

Bhutan is firmly rooted off the backpacker trail, ensuring that only the most enthusiastic and determined travellers actually visit. (Visitors must either be guests of the government or on an approved travel programme.) Given the limited number of people who have been able to experience Bhutan for themselves, the current exhibition at the Ueno Royal Museum makes a concerted effort to educate about the country’s vibrant cultural history whilst celebrating 30 years of diplomatic relations between Japan and the Bhutan. Aptly titled The Bhutan Exhibition – Hint to Happiness, it is a vibrant mix of art, clothing and religious artefacts from the Kingdom.

The first thing that strikes you about this exhibition that manages to cross the boundaries between art, travel and history is the colour – yellows, reds, blues and greens provide an underlying theme throughout the collection. Cosmology and astrology play a large role in this colour palette. According to cosmology, the combining of the four essentials (fire, wind, water and earth) created a new form, the human body, with these five elements shaping the foundation of the Bhutanese indigenous medicine. In this context, the colour red is designated to fire, green to wind, white to water, yellow to earth and blue to space. With regards to astrology, red, blue, white, yellow and green are said to represent the inherent human attributes of greed, anger, ignorance, pride and jealousy.

The first floor is devoted to everyday objects, weaponry and clothing. It’s a chance to see how even common objects (bamboo wine container; curry bucket) are immaculately crafted. Like neighbouring Nepal, Bhutanese traditional dress is all homemade, with patterns passed down from generation to generation. The men’s tunics are subdued, while the women’s dresses are elaborately woven using brightly coloured thread. Unfolded and hung on the wall, each piece of clothing looks like an artwork in itself, measuring roughly 2m x 1m. Most patterns are simple geometric designs repeated for maximum visual effect – and from a distance, some even resemble colourful 8-bit video game graphics. 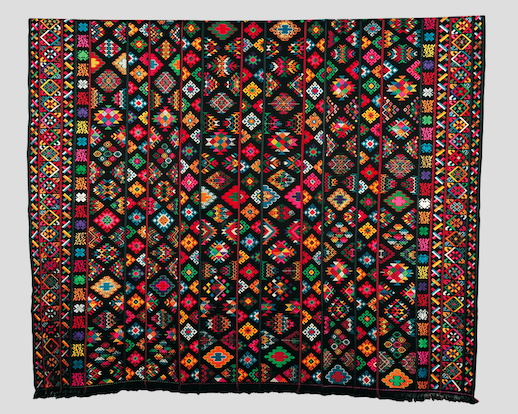 Traditional masks hang from the wall, while a video shows Bhutanese dance. It’s all very visually stimulating – and could even be seen as rather ominous – but that’s exactly what is intended. Many of these masks and dances are a way to ward off evil spirits. Almost each village in Bhutan has its religious festival characterized by prayers and songs, and in most cases by religious dances called cham. Dancers, either monks or lay practitioners, wear elaborate costumes made of silk, often decorated with ornaments of carved bones. For certain dances they wear masks, which may represent animals, fearsome deities, or just plain human beings. The masks are so heavy that dancers protect themselves from injury by binding their heads in strips of cloth to support the mask. 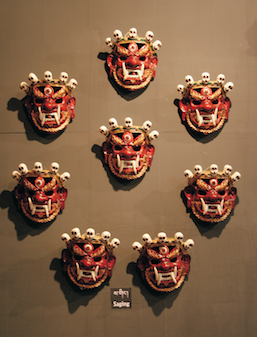 The second floor, presenting religious and royal artefacts, is a contrast of simply designed prayer cymbals and elaborate Buddhas plated with gold. Every aspect of Bhutanese life is influenced by Buddhism, which was introduced to the country in the seventh century. Bhutan is the only country in the world that has retained the Vajrayana form of Mahayana Buddhism as its national religion, and inside the exhibition you can see a selection of small Buddha Vajrasattva statues that reflect the peace and solitude the nation is known for. With its first democratic elections in 2007, Bhutan has recently been enjoying its newfound democracy, yet alongside the authority of Buddhism there continues to preside the strong word of the king, still widely respected as a leader of the county, and often heralded as a symbol of the country’s happiness. Right at the end of the exhibition, visitors can pass through the Theater to Happiness, where Bhutanese citizens describe their own moments of happiness.

In relation to other countries in Asia, very few tourists visit each year, and the appeal of Bhutan for travellers still lies in its mystery. The Bhutan Exhibition – Hint to Happiness offers a window into one of the world’s most fascinating countries through the lenses of art, travel, history and textile design.