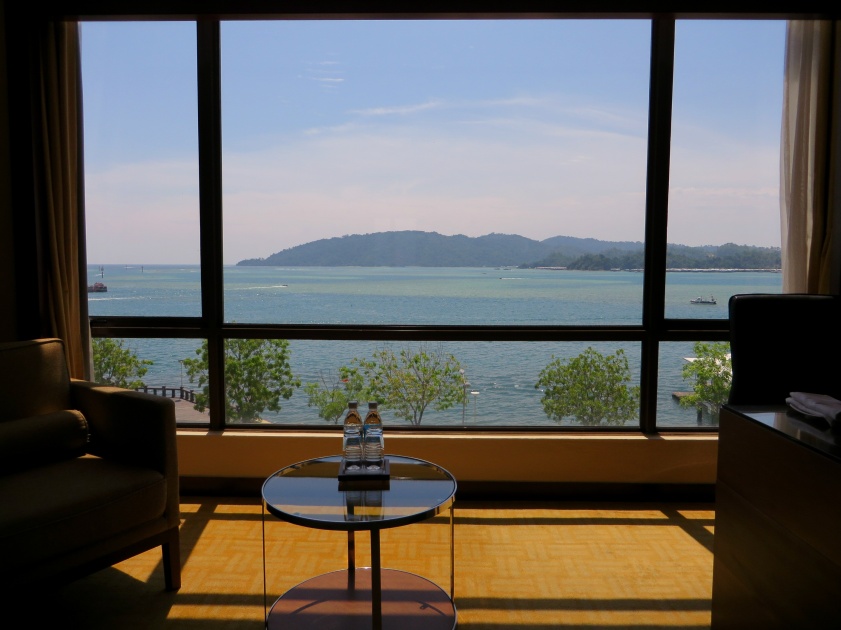 Five-star luxury in Sabah – with design that gets better at every turn.

As a travel writer you usually know right from the off what your money-shot is going to be – that is, the photo you’re gonna lead with when writing an article. For my stay at the Hyatt Regency Kinabalu, however, I was pretty much spoiled for choice. It seemed everywhere I turned I was faced with either an amazing view, an amazing piece of interior design, or plate after plate of amazing food. In the end, I settled on the above shot as I think it sums up what the hotel does best: offering five-star luxury right on the edge of the South China Sea, overlooking the five tropical islands that make up Tunku Abdul Rahman National Park.

My first introduction to the Hyatt brand was actually way back in 2003 when I attended a three-day conference at the Park Hyatt in Tokyo – but despite having travelled the world since then, this was to be my first actual stay at one of the Hyatt’s famous five-star hotels. And I can say first-hand that it lived up to the hype I had awarded it in my own head. It was very, very good.

My huge room on the fourth floor (0445) was basically a giant portal into the vast South China Sea. Huge panoramic windows framed the scene, with the sunset being the star attraction every night, filling the room with a red and pink glow. Borneo sunsets are famous, and it’s easy to see why. 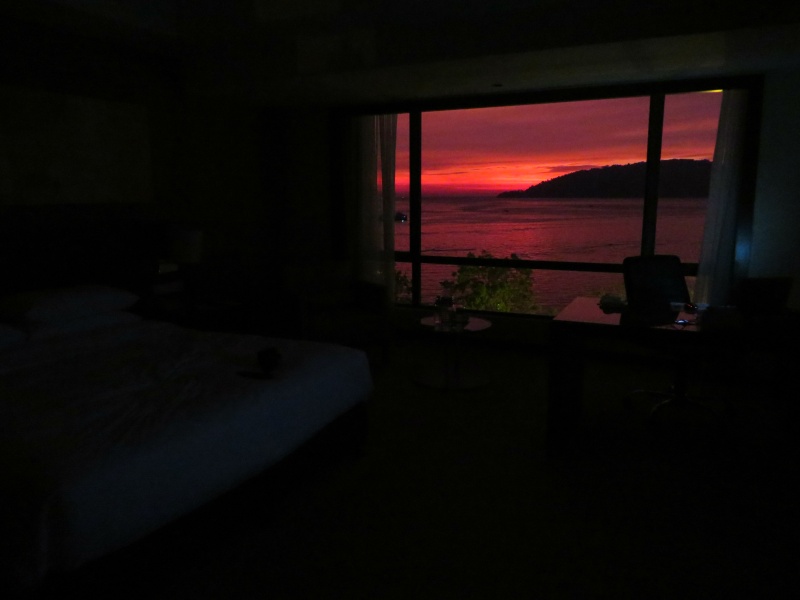 The deign of the room itself shone in its simplicity. Quite often, hotel rooms are rather formulaic, with a boxed-off bathroom put in as an afterthought, doing nothing to enhance the living space. The room design at the Hyatt regency Kinabalu has been created to address this fact. The bedroom and bathroom are one, yet in no way is it intrusive. The bathroom area can be closed off with sliding wooden panels, and the design is clean, crisp and in order. No ugly fridge, kettle or any of that stuff sitting about. All appliances are cleverly hidden. I love the way the designers have recognised that these items do not need to be on show. The result is a room that feels like it has been thought about. It’s impressive. Why aren’t all hotels designed like this? It makes perfect sense. 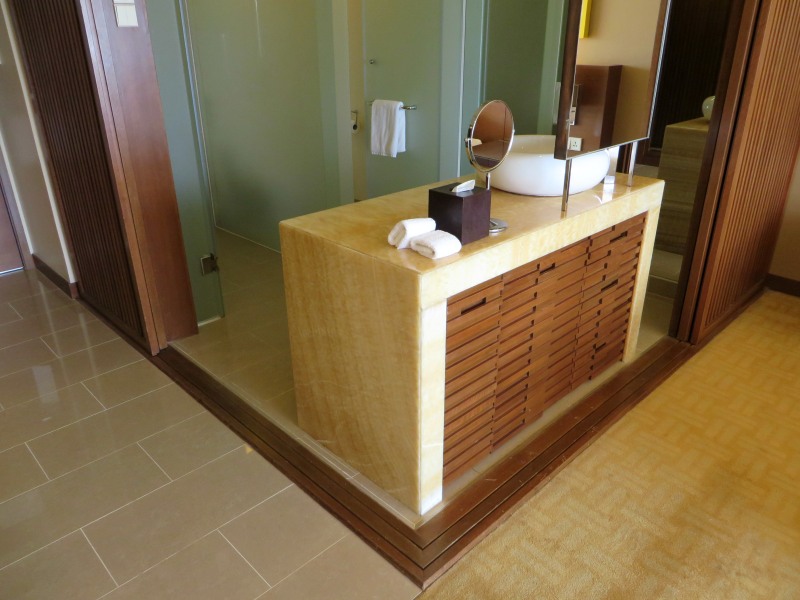 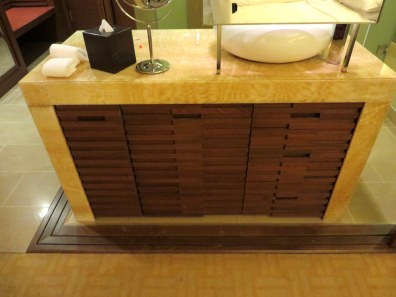 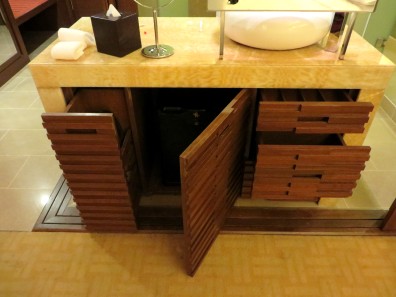 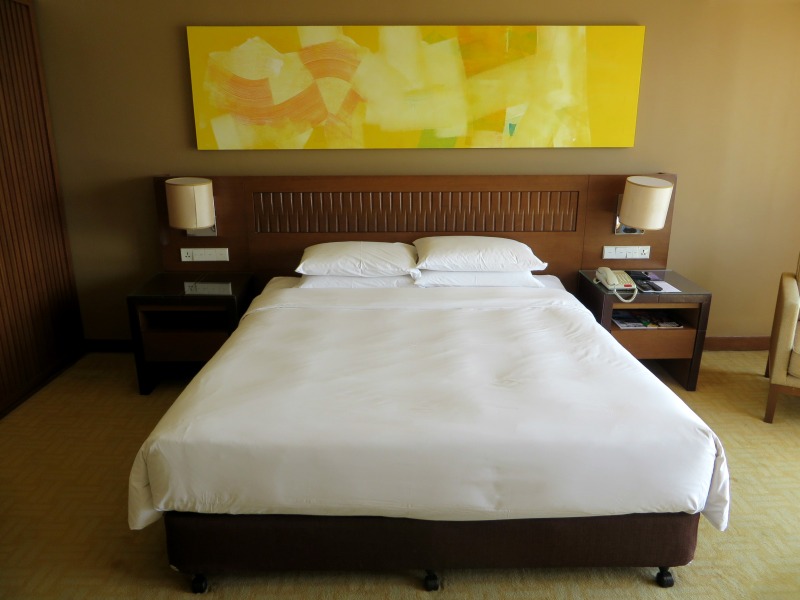 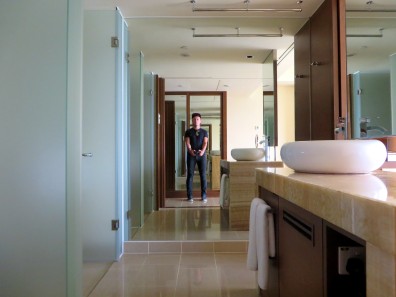 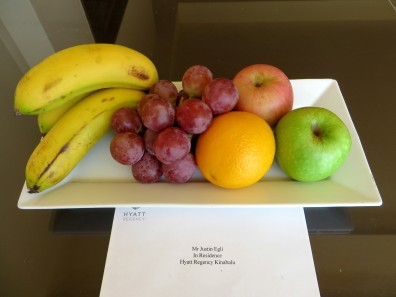 I was fortunate enough to be able to eat my way through the hotel during my stay here. At the open-planned Tanjung Ria Kitchen, I tried the restaurant’s signature dish, Oxtail Assam Pedas – widely acclaimed as one of the best in the country. An elaborate lunch buffet also threw up surprises such as incredible cheese-naan, durian cheesecake and homemade gelato (14 flavours of which are also available at the hotel’s Mosaic Cafe, where I tried a rainbow latte unlike anything I have seen before.) Because I live in Tokyo, the hotel team were keen for me to dine at Nagisa – the hotel’s Japanese restaurant styled after a Japanese winter cottage. Here I feasted on tempura, maki rolls, salmon salad and matcha (green tea) gelato. I even ordered a steak from the extensive room service menu, getting my energy up after a visit to the hotel pool & gym. 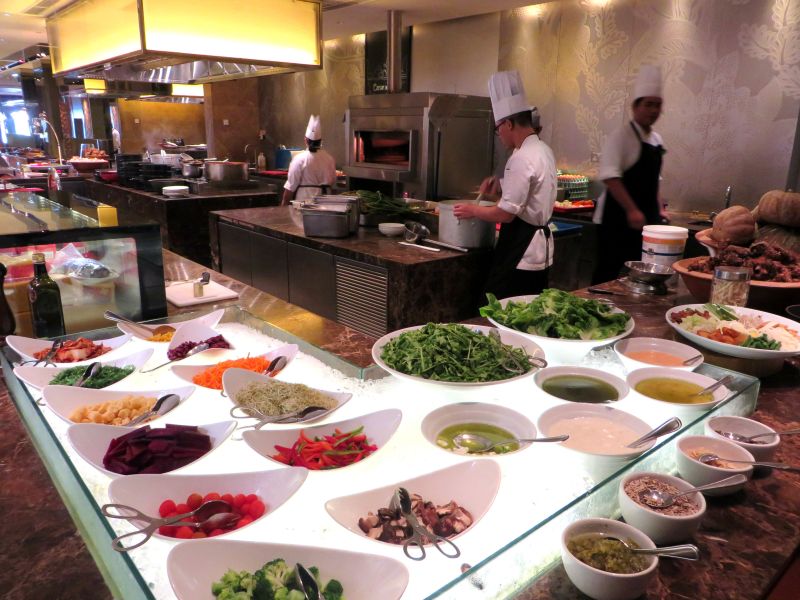 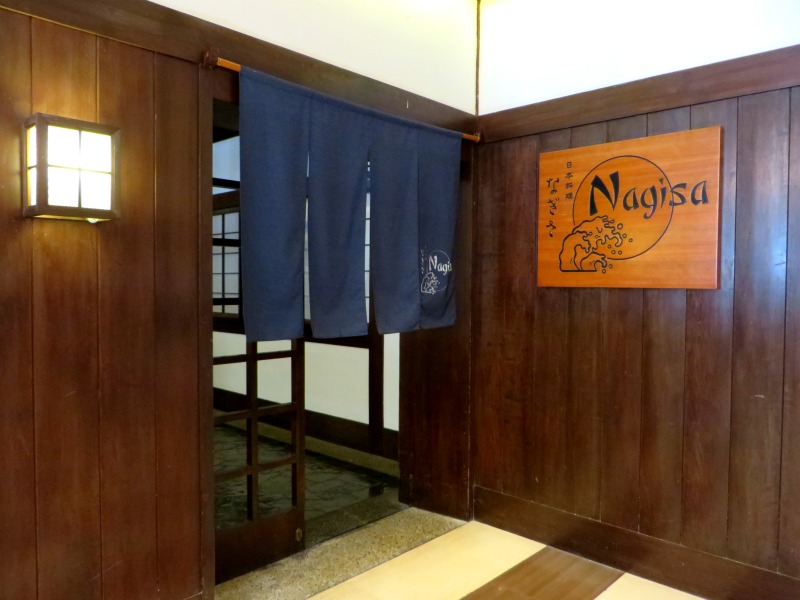 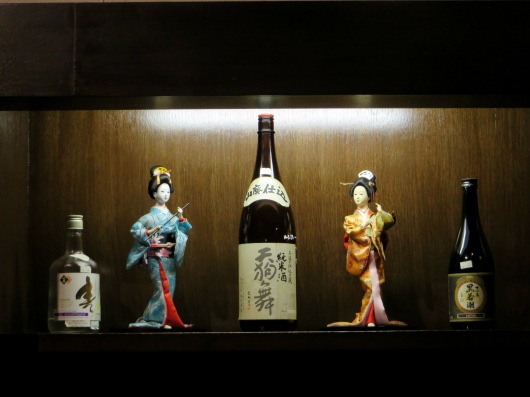 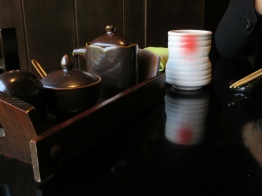 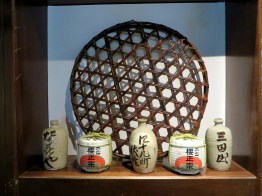 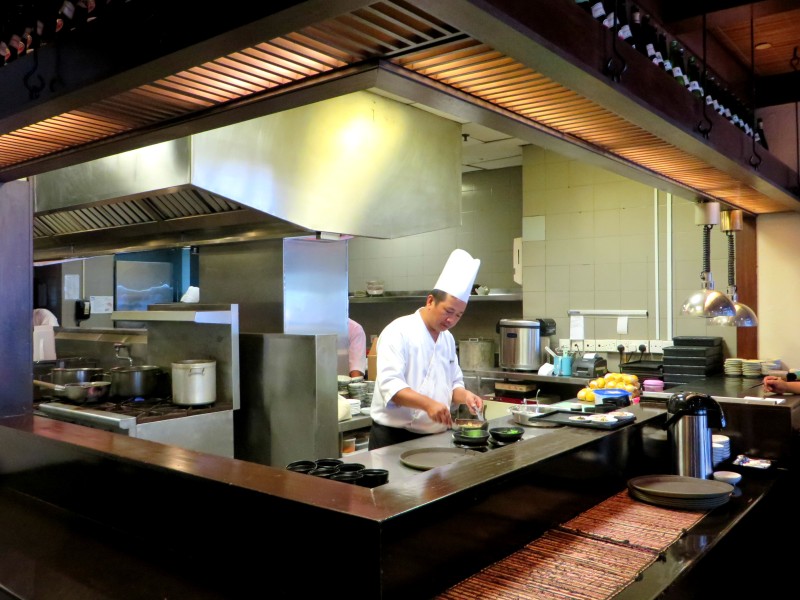 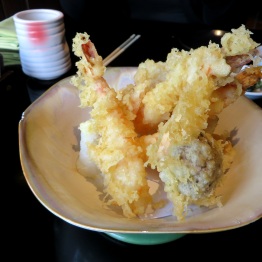 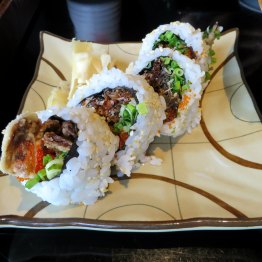 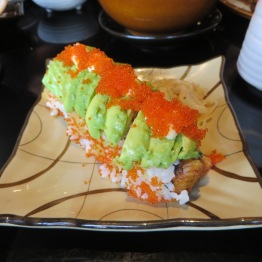 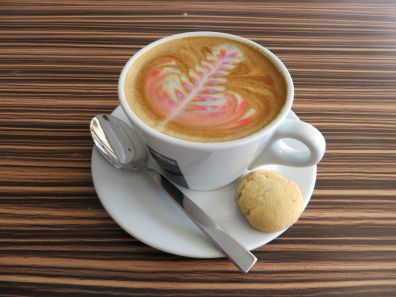 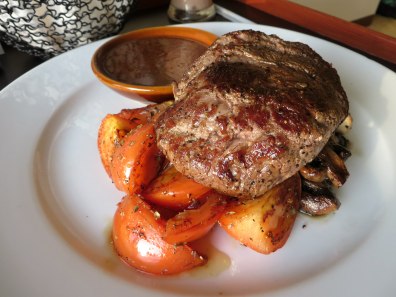 This was my second time to Kota Kinabalu, the first being seven years ago. The city has definitely grown, but still manages to maintain its own character unlike a lot of other destinations in SE Asia. To its credit, Kota Kinabalu is a city that welcomes tourists but refuses to change just because of them. The result is a destination that feels local at heart. One of the major draws of this hotel is the proximity to Jesselton Point, the ferry terminal where you can catch a boat to the islands. My tip is to be there at 8am and you are guaranteed to have beaches to yourself. Sapi island has a little jungle trail you can follow, while Manukan is the picture-postcard island getaway you have dreamed about. This time around I didn’t make it into the interior of Sabah, but I do recommend it if time allows.On my last visit I made the effort to go to Danum Valley which was totally worth it. (I’m the little red speck among all the green below). 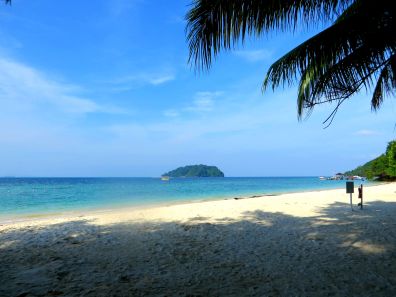 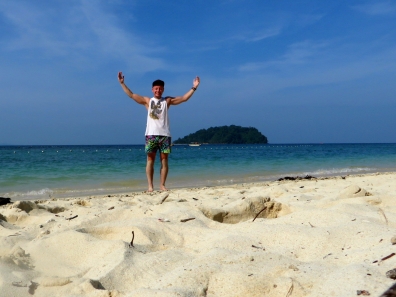 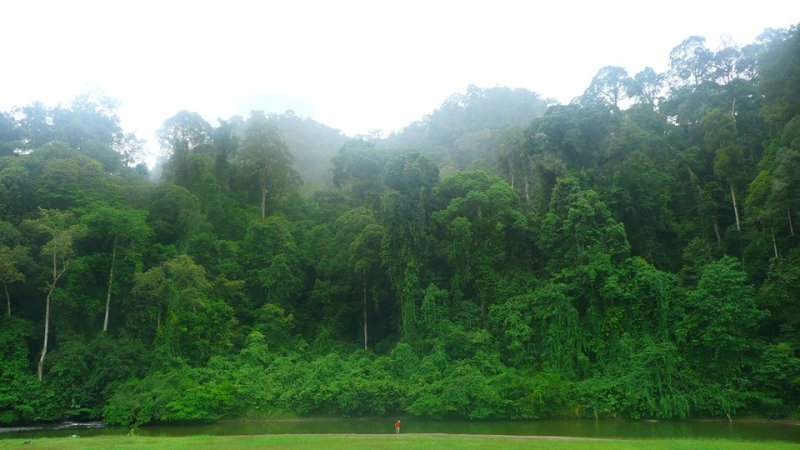 The Hyatt Regency Kinabalu was my last stop on this SE Asia trip, and I couldn’t have asked for a better way to round it all off. The design, food and excellent location are what set this hotel apart.