Is it wrong to take money from those less fortunate from yourself? Not if you win it.

Bukit Lawang is one of the main draws to northern Sumatra: a small village at the bank of the Bahorok River and your main gateway to the colossal Gunung Leuser National Park, famous for its mosquito-infused jungle treks and flourishing orangutan population.

After climbing Mount Sibayak I headed to Bukit Lawang for a few days with the sole intention of lying in a hammock and doing nothing. While others were gearing up for day- and night-treks, I was poking about the local village, drinking coffee and hanging about with the locals. I didn’t feel guilty about not throwing myself into nature. I have been to Danum Valley in Borneo before. I’ve seen orangutans, and wasn’t interested in trekking this time around. Next time. Maybe.

On this occasion I was content to read a book, listen to the rain fall and gamble. Oh yeah, there was gambling.

While Bukit Lawang primarily exists to serve the tourist industry, it is still a small Sumatran village at heart. There’s an Islamic school, there are local houses, local restaurants. The people here don’t hound you to buy stuff. There is no hard-sell. If you want something, people will be more than happy to help you. But they won’t force it down your throat. With that in mind, it’s a cool place to just walk about and soak up the Indonesian way of life.

I stopped to watch a bunch of guys gambling in an alleyway. The main guy had three little cups and was skillfully (and quickly) maneuvering a small ball bearing between them. It was that age-old game of having to guess which cup the ball was hiding under. The stakes weren’t that high, but then again, they weren’t that low either. Locals were throwing in 10 and 20USD at a time,  which over here is a decent amount of money (10USD is your room for the night, while another 10USD can feed you well for the whole day). Being the only westerner around I felt like I was getting looks like “join in or go away”. So I joined in. I started off low. And I won. Maybe a dollar or two. But then, like De Niro says in Casino, you gotta up your bets. So I did. And I won, again. I think the yeeeooow in this video sums up Northern Ireland to a tee.

Don’t worry though, I lost everything I won on the next hand. So it was even-stevens in the end. Always the way, eh?

A flash flood hit Bukit Lawang in November 2003, destroying the local tourist resorts and having a devastating impact on the local tourism industry. Around 400 houses and 35 hotels were destroyed by the flood, with 239 people losing their lives. Local authorities attributed it to illegal logging. Walking along the banks of the rushing river, especially after heavy rainfall, it’s easy to see how a flood like this could happen so quickly and obliterate the surrounding area.

Local life down by the river. If a flash flood hits, there’s no chance really.

Where the currents aren’t so strong, people wash themselves, and their clothes.

Up high. No need for gyms here. This guy was a walking muscle.

One of the richest tropical rainforests in SE Asia, and one of the two remaining habitats for Sumatran Orangutans.

Islam is the dominant religion in Indonesia, which also has a larger Muslim population than any other country in the world. I visited an Islamic school that’s adjoined to an orphanage for kids who lost their parents in the 2004 tsunami. Thankfully the kids in this photo still have parents, and were out for the day with their families when they surrounded me and started asking me endless questions about Justin Bieber and Lady Gaga. 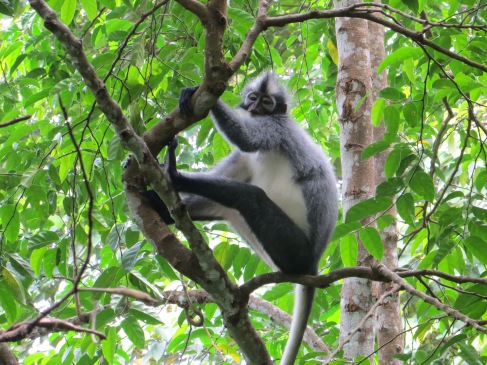 I was sleeping high up in the canopy of the jungle. Lots of good widlife around me…

… as well as in my room. I shared my wooden hut with two huge geckos, a rat and a bird. Thank god for mosquito nets.

Refreshing to the planet

Pure water from the heavens