Why you should visit the world’s largest island nation

I’ve been to Indonesia four times now – at least once a year since my first visit in 2013. Despite technically being the largest country in SE Asia (in terms of landmass and economy), it gets somewhat overlooked when people are considering a trip to this side of the world. Of course people know about Bali – but you would be surprised by the amount of people who still actually think Bali is a country in itself, not realising it is simply one of many islands in Indonesia. One of 17,500 islands in fact – 6,000 of which are inhabited.

As if to prove Bali’s own popularity, it was here where I landed on my first trip. It’s an island that offers a good sample of what the rest of the country has to offer: beaches, rice fields, temples, mountains and rainforests. Basically whetever you like about Bali you can find elsewhere in Indonesia on a larger scale – so in spite of continually high tourist numbers, it’s a good a place to start your Indonesian journey before deciding where to head next. On subsequent trips I myself decided to explore the main island of Java, as well as the north of Sumatra. But despite having already seen a fair bit of the country, there is still so much more I have to see – from the isolation of rural Kalimantan in Borneo, to the ancient burial rituals of the spider-shaped island of Sulawesi. Above all, the main reason I love to travel in Indonesia is because each part of the country is just so totally diverse.

At the summit of Mount Sibayak – an active volcano in north Sumatra.

Many travellers are weary of going back to the same country more than once – instead wanting to visit somewhere new each year in order to increase their country count. That’s all well and good – but just because you have spent two days in Shanghai, doesn’t really mean you’ve really seen China. What I’m saying is don’t be afraid to continually revisit Indonesia multiple times, as every trip will offer a different experience. This will be the first year in a while that I won’t be going. I’d like to visit again next year, doing an overland trip through Sulawesi, along with a side trip to Timor Leste, one of my last few remaining SE Asian countries.

I make a point of only writing about places I have actually been, and so this post will reflect that. I’m certainly no expert, but you are thinking of visiting Indonesia and have any questions about the specific places I’ve mentioned here, drop me a message and I’ll help out in whatever way I can  🙂

Indonesia is massive. But it’s only when you try and cover large distances by land do you really appreciate – or become daunted by – its sheer size. UK citizens get a free 30 days on arrival, but this could easily be used up on Java, Sumatra or Sulawesi alone.

Despite welcoming millions of visitors every year, public transport in Bali, in relation to other places in Asia, is very bad. Not in the sense that it’s dangerous, just that it’s pretty much non-existent. You can either rent a bike/car, take a taxi or use a shared minibus to take you around the country. Unlike Java, there is no train network in Bali. Many travellers sign up for a horrid minibus tour that will drive them from Denpasar in Bali to East Java, taking in a few sights on the way. These tours are long, cramped and best avoided. Much better to split a long journey into stages, or even fly. I myself flew from Denpasar to Java for just $30.

The train network in Java is good – and it’s worth experiencing at least once. The scenery en route from Yogyakarta to Bromo is particularly memorable, with volcanoes rising on the horizon. If you want Executive class (Eksecutif), best to buy your ticket the day before. If you are happy enough with third class (no aircon, hard seat etc) just turn up on the day. 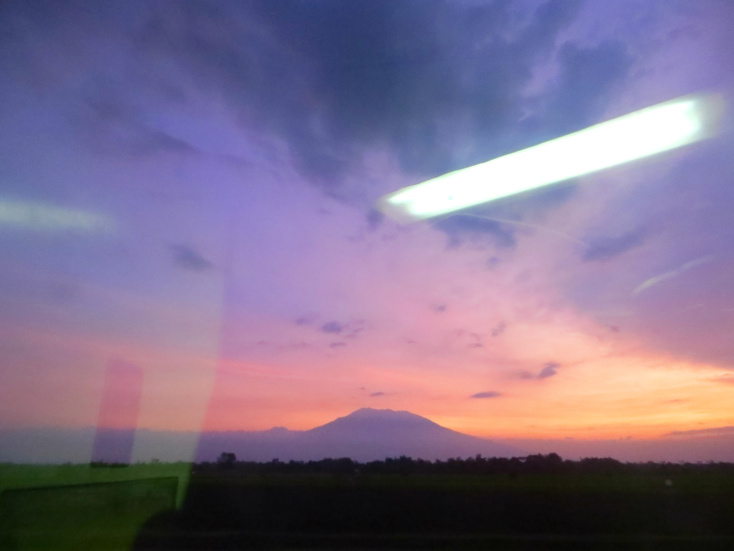 Chasing volcanoes: The view out the train window from Yogyakarta to Surabaya

Of course, travel in Indonesia has its pitfalls, and the country sometimes makes the news for all the wrong reasons. Nearly every year, forest fires sweep through the country (reaching as far as Phuket in Thailand) and smothering the lower part of SE Asia in a blanket of smoke, known as ‘haze’. These fires are started deliberately by farmers who have cleared their land and want to get rid of the debris quickly. It’s completely illegal, and the government gives out reprimands each year. But it seems these warnings fall on deaf ears and the pollution continues.

I was on the receiving end of this haze in Kuala Lumpur last year. Smoke covered the whole city, people wore masks and you couldn’t see the sun. It was totally grim. Ironically, it was only when I flew away from Kuala Lumpur and back to Bali did I get any clear skies. So while the fires may start in Indonesia, it’s the wind direction that will really determine where is hardest hit. Bottom line is don’t let these fires deter you from going. Just be sure to check what part of the country (if any) is currently experiencing pollution and adjust your itinerary. Indonesia is such a big nation that there will always be somewhere to visit.

Haze in Kuala Lumpur on the left. Bali on the same day on the right. 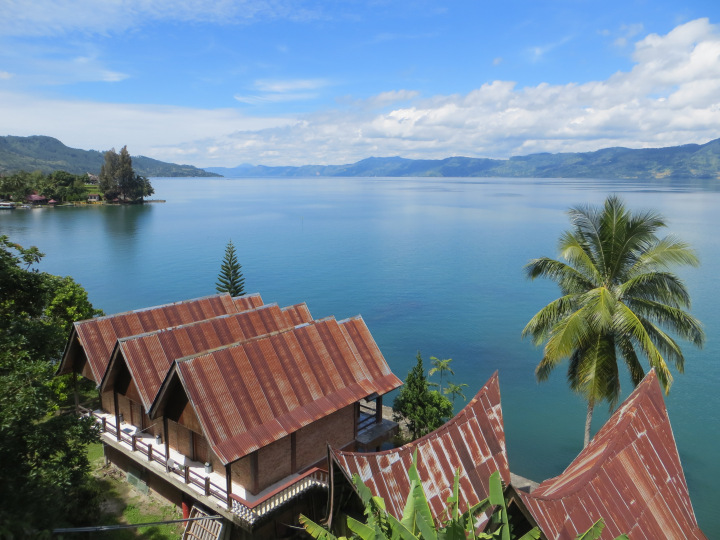 Lake Toba in Sumatra – the largest volcanic lake in the world.

I visted Sumatra during the month of December, taking a snowy midnight flight from Tokyo, changing planes in Kuala Lumpur at 6am and then travelling onwards to Medan, the major transport hub of north Sumatra. Because my first flight was delayed, I had to rush across the runway in KL onto my next plane which meant my checked bag didn’t make it. Cue having to wait around Medan airport for five hours waiting for my bag to show up. Live and learn. If at all possible, travel with hand luggage in Asia if only to avoid this sort of situation. I wrote a rather long post about this particular journey. Aptly titled ‘The most insane day of travel I’ve ever had‘, it charts the journey from my house in Tokyo to Lake Toba in Sumatra over the course of 24 hours. It’s worth a read if you’re interested in what the reality of travelling in SE Asia can be like – from driving through flooded roads while the driver plays the Vangaboys on the radio, to catching a ferry with a old captain wearing a Cannibal Corpse baseball cap.

Climbing the Active Volcano of Sibayak

Gambling in the Rainforest Village of Bukit Lawang

Hanging out with Sumatran Gangsters in the Jungle

Drinking Blood with the Batak People on Christmas Day

Sticking up for the Small Town of Berastagi

Looking down on the tiny mountain hamlet of Cemoro Lawang as clouds swallow the village. (Taken from Mount Penanjakan.)

If Sumatra is known for its rainforests and Bali for its sun and sand, Java is the country’s cultural heart – offering ancient temples and mystic volcanoes that sit alongside cities that are beyond manic. Jakarta is everything you have heard it is: a sprawling mess with traffic that seems deliberately intent on making you sweat and late in equal measures. A new train system will be introduced next year from the airport into the city, but until then you’ll have to just suck it up and use the roads. Allow at least three hours from the city centre to the airport. As with all places in Indonesia, don’t be afraid to eat in places where locals eat and there are no foreigners. The food is often more authentic. I think there best meal I ever had in Indonesia was by some random stall by the side of a dusty freeway in Jakarta.

Cemoro Lawang & The Beauty of the Mount Bromo Region

Staying in a Homestay in East Java 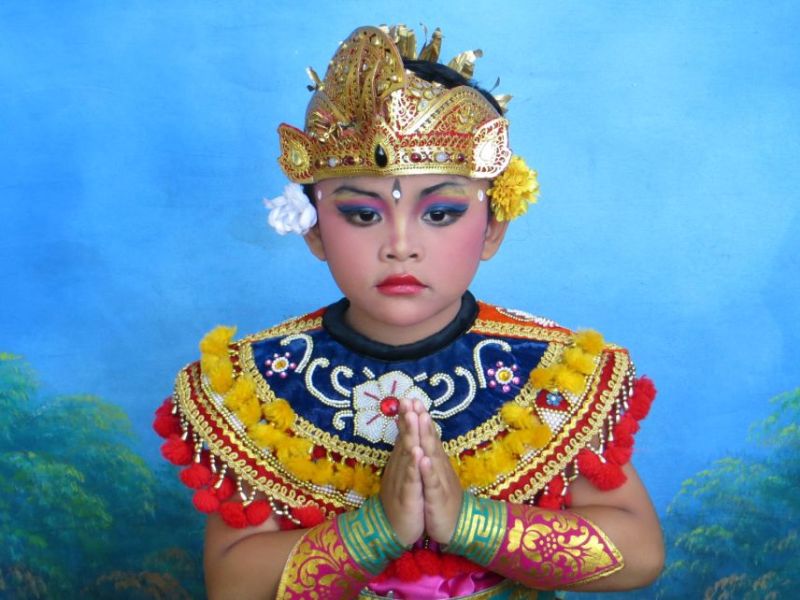 On my first visit to Bali I actually didn’t have a hotel booked, deciding instead to find one when I landed. At the airport I saw a bunch of Australian lads drinking beer and getting on like dickheads. “Where are you guys going?” I asked. “Kuta!” one of them replied. Kuta’s on the west coast, and so I hailed a taxi, got in and told the driver to head east in the opposite direction towards Sanur. My party days are behind me, but If you are looking for nightlife by the beach, definitely start your trip in either Kuta or Seminyak. I chose Sanur because it is much quieter, but also because it gives direct access to the islands of Nusa Lembongan and Penida. I’ve had some pretty memorable experiences in Bali over the years, including getting bitten by a monkey and needing a course of rabies treatment; slicing up my leg with fire coral; getting chased by a pack of dogs through a forest; finding an abandoned theme park; and jumping off a cliff into the sea. Gotta love travel!

My Crappy Gym on Nusa Lemongan

Beautiful Bali: In the Shadow of Gunung Agung

The Day I Saw  a Body Being Burned in Denpasar

Visiting Denpasar: The Only Tourist in Town

I’m not sure why, but I have always felt a connection with this side of the world. The people, the food, the landscape, the way of life. It’s why I keep travelling throughout the Asian continent, as opposed to exploring South America etc. So while I love travelling, it’s more actually travelling in Asia that I love.

To read more stuff from my travels from around SE Asia click here.