Mount Bromo shows its darker side at this haunting Hindu festival.

This is Mount Bromo, an active volcano in East Java, Indonesia. I took this photo while flying over the area from Denpasar to Surabaya in a small aircraft. Five days earlier, I had been standing on top of the volcano at midnight, about to take part in Yadnya Kasada – a haunting Hindu ceremony unlike anything I’d ever seen before.

What is Yadnya Kasada?

Yadnya Kasada is the biggest day of the year for the local Tenggerese people, when they come to the volcano to make their yearly sacrifices. On this day, the Hindu people of Probolinggo, East Java, travel up the mountain to make offerings in the form of foods and flowers and even sacrifices of farm animals to the mountain gods by throwing them into the caldera of the volcano.

This ritual dates back to the 15th century and is based on the ancient legend of Princess Roro Anteng. Her and her husband were unable to have children and prayed to the mountain gods for help. The gods blessed them with 24 children, but demanded that the 25th child was to be thrown into the volcano as a human sacrifice. The couple complied and so began this sacrificial tradition which still occurs each year at Bromo.

Mount Bromo is East Java’s most famous celebrity, belching thick noxious sulfuric gas from its huge crater 24 hours a day, 365 days a year. Sunrise looking over Bromo and its neighbouring peaks of Batok and Semeru offers one of the most iconic images in Indonesia, yet when the clouds roll in you really do get a sense of the utter desolation all around you. When night falls, the volcanoes are an ominous presence. Nothingness surrounds you in every direction – the caldera a lifeless, bleak reminder of the destructive forces of nature. 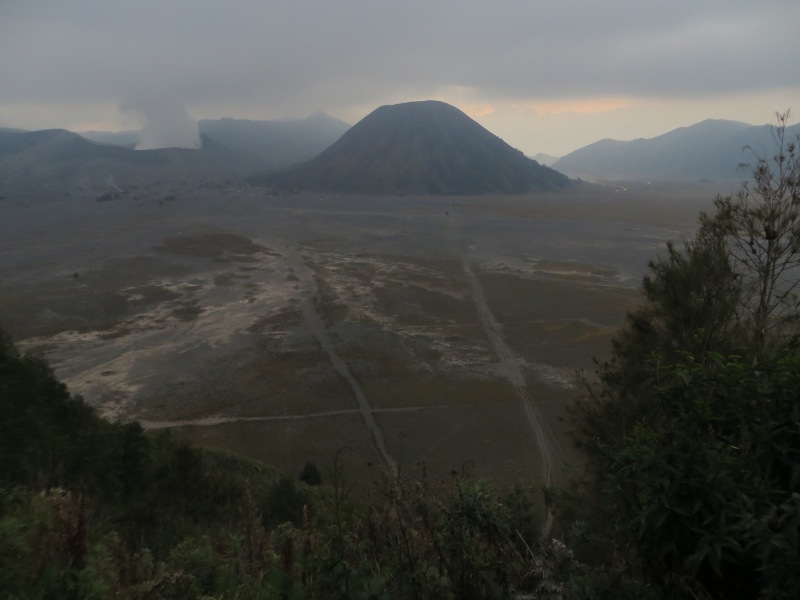 Desolation. The ‘Sea of Sand’.

Mount Bromo sits in the middle of a vast plain of known as the ‘Sea of Sand’. I was going to attempt to cross the Sea of Sand in complete darkness and climb the slopes of the volcano at midnight to witness the festival. While many photos exist of the festival during daytime, there are virtually no photos of how it looks at night – or any written accounts of the experience in total darkness.

My pilgrimage to Yadnya Kasada

The homestay I’m staying in is 20 metres away from the fence to Tengger Semeru National Park. Three girls are also staying there, and I convince them to come with me as it means three more torches, and backup in case anything goes wrong. We climb down a ravine and make it on to the Sea of Sand – walking for about 45 minutes in darkness, veering towards the sound of vehicles in the distance.

At the base of the crater people are huddled together with blankets over their heads coughing violently due to the sulfuric gas being blown in a strong downwind from above. As we begin to climb the steps to the summit the gas becomes so intense we can’t breathe. Droplets of sulfuric rain sting our eyes. We have to stop, ripping off our outer layers and smothering our faces with them to stop the gas. There’s a slight moment of panic, but it soon passes.

At the top of the crater a small group of people burn trash to give light and warmth. This woman looks on, surrounded by darkness.

Climbing the steps we soon reach the summit of the crater, thick smoke all around us – the only visibility coming from our headlamps and a fire crudely made out of rubbish by some locals. It’s eerily silent: a few people coughing, and the faint sound of traditional Indonesian music being carried from down below. People line the crater, huddled together for warmth. Shining the torch on them only reveals a mass of blankets, often with a pair of eyes shining through. Taking quality pictures in these conditions is virtually impossible. I turn on the flash only to see the extent of dust and debris in the air around us.

A man stands inside the crater, holding a makeshift net and waiting to catch any offerings thrown from above. There are more people further down but it’s so dark the camera simply can’t pick them up.

Dust and smoke fills the air, breathing is difficult.

I lean over the verge and see about 100 people inside the steep crater itself, standing about with homemade nets trying to catch the offerings thrown in from people from above. This is an active volcano, and people are inside it, one slip away from death; it’s mind-boggling to think about. An old man approaches me silently asking for an offering, his eyes staring into mine. Others walk about in dirty, torn balaclavas, obscuring their faces. It’s really unsettling. You can get an sense of just how dark it is from the video below. 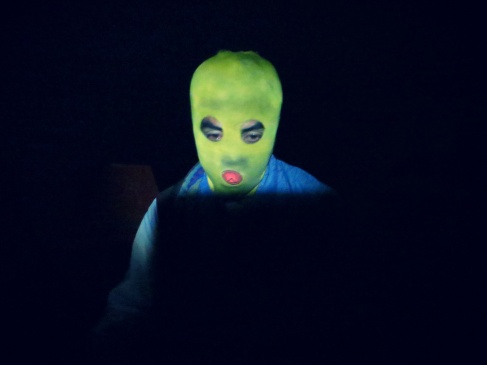 Suddenly there’s a bit of commotion as someone produces a live chicken from a sack. He burns the plastic hoop that was tying its feet together and without warning throws it into the volcano. People inside the crater scramble to catch the bird, dust rising and cries from the injured animal echoing in the air. This is repeated many more times, with many more birds being thrown in.

A man holds a live chicken ready to throw it into the volcano. 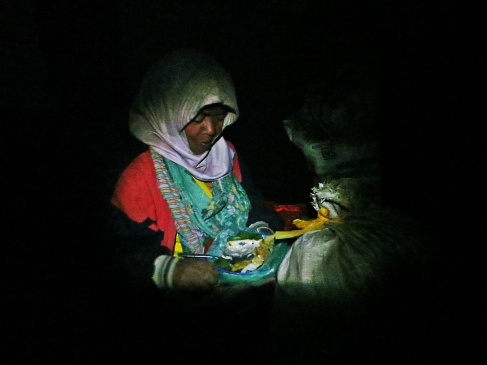 It’s virtually pitch black at the summit, but when the light of your torch shines you can see people sitting around, even eating. 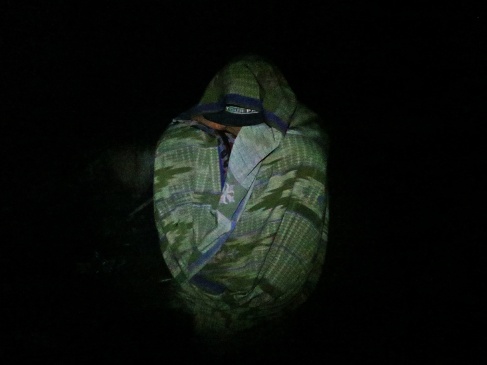 Others appear to be nothing more than a pile of blankets.

The sulfur fumes eventually become too strong. We don’t have masks and the locals who are staying up there are lying close the ground covering their faces trying to breathe. It almost feels like this is a religious test of endurance: people showing their allegiance to the mountain gods by suffering such dangerous conditions. Climbing down the volcano, the base is now a hive of activity. People have driven across the Sea of Sand on motorbikes and the scene looks like something out of Mad Max. The vibe is unlike any festival I have ever seen: people seem like they are in a trance.

A woman with a small tent half way down the crater.

Walking back through the Sea of Sand, the downwind from the volcano has caused a sandstorm and zero visibility. We can see our hands in front of our faces but not much else – and the lights we were using as beacons on the nearby mountain have been obscured by cloud. We shine our torches on the ground and find horse tracks, following them back to where we started. Finding the bottom of the ravine we climbed down hours ago, we all breathe a sigh of relief, glad that we have escaped a night sleeping rough in such a desolate wilderness.

Looking back towards the volcano it now looks so glorious and innocent in the moonlight, surrounded by stars in the sky. But I don’t think any of us will forget how intense it really was up there at the top of the crater at Yadnya Kasada.

DRINKING BLOOD WITH THE BATAKS

THE DAY I SAW A BODY BEING BURNED IN DENPASAR

DRINKING WITH SUMATRAN GANGSTERS IN THE JUNGLE

Don’t forget to subscribe on the main page to get the latest from Ikimasho! mailed direct to your inbox.