Last winter vacation we decided not to head back to Ireland, or even hop across to SE Asia. Instead, we stayed put in Japan and made the journey down to Hiroshima Prefecture where we spent a few days in Hiroshima city, before moving on to the neighbouring port city (more of a town, really) of Onomichi. Despite having heard many good things about this part of Japan, it was our first time to Onomichi and we were both pleasantly surprised by its relaxed atmosphere, winding hills and vibrant local life.

For me, this particular city has nearly everything you could ask for when visiting Japan: easily accessible via train, yet maintaining a sense of exclusivity in that there aren’t too many tourists about. It’s a city that you can explore at your own pace – poking your head into little local eateries, before enjoying the mountainside’s intricate network of alleyways and staircases.

Hundreds of lanes to explore. Which way next?

The journey from Hiroshima to Onomichi takes little over an hour, with the train weaving through small valleys filled with morning mist and hazy sunshine. Hiroshima itself is a relatively small city, and so it didn’t take long for buildings to disappear from our train window and be replaced by rice fields. The last segment of the journey – the part that hugs the coastline – I had read about, and so I was expecting beautiful seascapes. However, I feel much nicer seascapes can be seen from the small Enoden train line that runs towards Enoshima in Kanagawa.

The train from Hiroshima to Onomichi 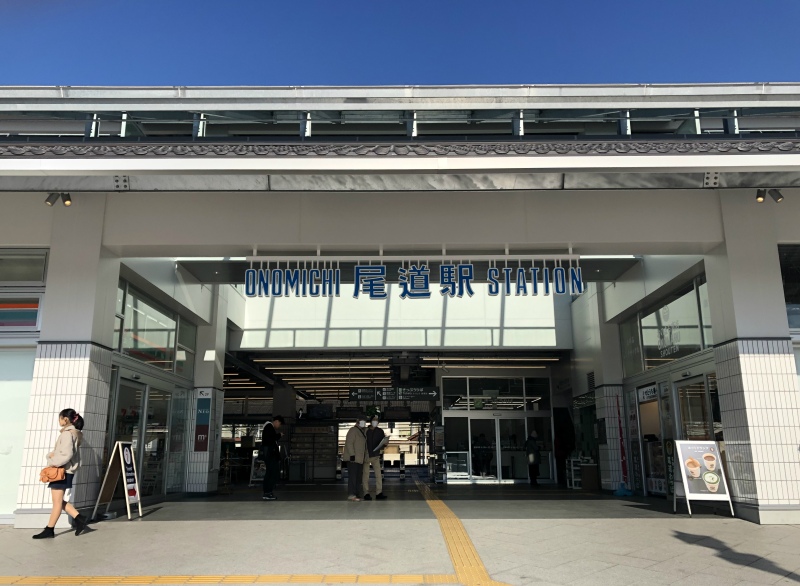 After arriving at Onomichi station we quickly got our bearings and then I was intent on sampling some Onomichi ramen which is very famous in the area. Onomichi ramen is characterized by its flat, homemade noodles, and also by the suspended chunks of pork fat that swim in the broth. Together, these ingredients make for a rustic, yet flavour-filled, bowl. Incidentally, the shop we went to seemed to be incredibly popular – and despite us being the first customers through the door at around 11am, just 15 minutes later all 30 seats were full, with a queue out the door. Sometimes ramen leaves me feeling a bit meh after I eat it: too greasy, oily and heavy. Yet for some reason this bowl kept enticing to have another sip, eager to have one last hit of umami taste. 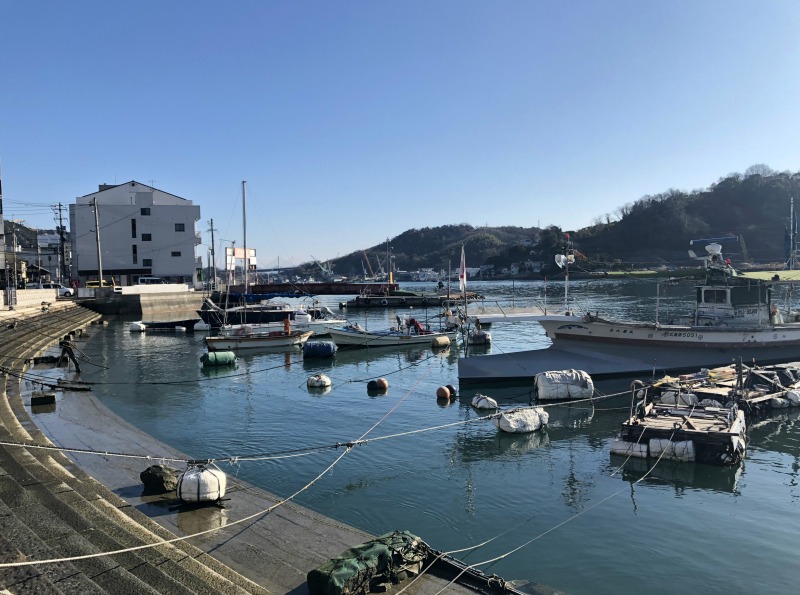 While temples on top of hills can be seen from behind.

Onomichi Ramen! Check out those chunks of fat.

Onomichi’s main draw is its Temple Walk – a 2.5 km walking trail that takes in 25 of the area’s temples. Starting near the station, the walk snakes its way up the mountainside, offering views of the Seto Inland Sea below. The route is clearly sign-posted, but it’s also fun to just veer off-course and explore the many lanes that criss-cross the whole area. The Temple Walk can be as short or as long as you want it to be, and staying the night means you can enjoy sunrise and sunset from any number of viewpoints. We were only in the city for a day, but we were still able to do everything we wanted to do.

Hills that go up…

and hills that go down.

Silhouettes against a blue sky

The entrance to one of the 25 temples 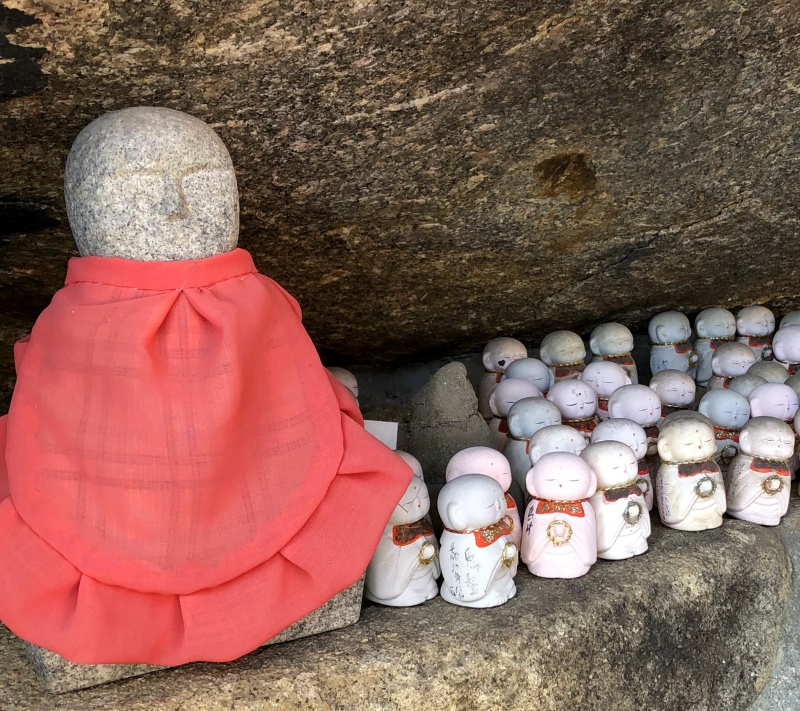 Small statues found along the walk

Views from the top 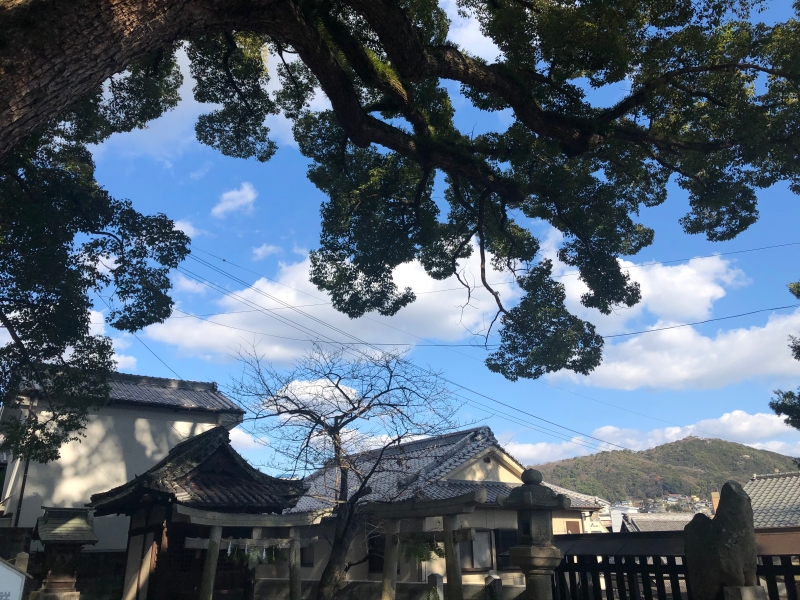 A weeping tree casts its shadow over a shrine

In Tokyo one of my favorite things to do is explore small, nondescript neighbourhoods filled with shotengai – retro shopping streets and covered arcades. Usually these areas are a bit run-down, but have a quaint and likable charm. Onomichi has one of the best covered arcades you could hope to find: independent shops all still operating and busy, with each of them contributing to the homely atmosphere of the city.

Onomichi’s long shotengai arcade that runs away from the station 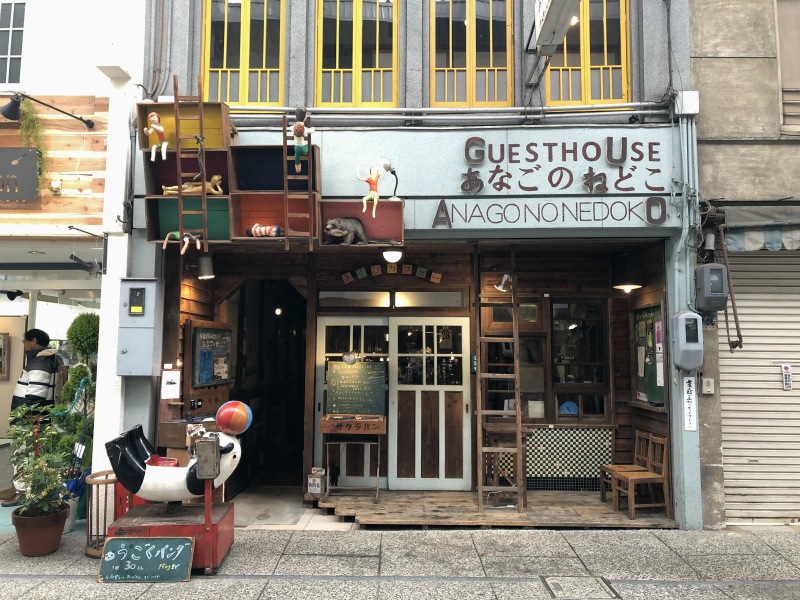 Onomichi is a peaceful, interesting, and relaxed city and I would totally recommend it if you’re traveling in this part of Japan.